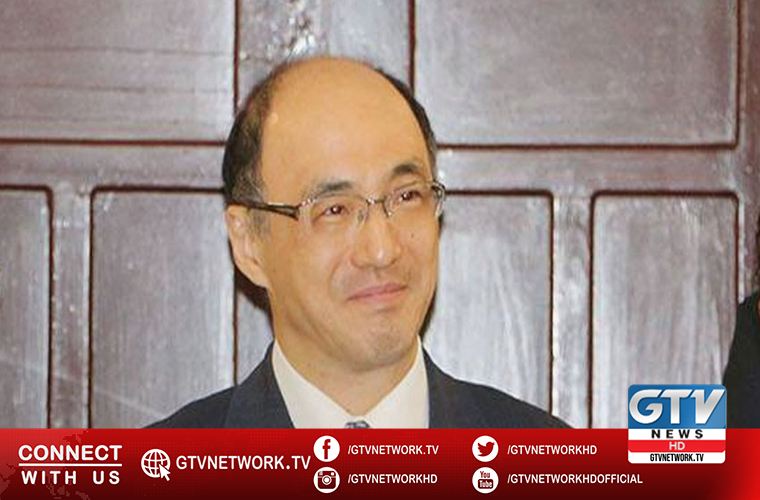 Minister and Deputy Head of Mission, Embassy of Japan in Pakistan Yusuke Shindo said this.  He was addressing a five-day Webinar series titled “Knowing Japan.”

The event jointly held under the aegis of the Embassy of Japan in collaboration with the Islamabad Institute of Conflict Resolution (IICR) here Sunday.

He emphasized that Pakistan must have to follow policy of export led growth through industrial and technological growth.

He cited Japan set an example for the rest of the world to emerge as a top world economy by modernizing its education system, hard work and commitment.

Deputy Head of Mission, Embassy of Japan in Pakistan, SHINDO Yusuke presented his lectures during this first-ever webinar series.

They included the topics, “Japan- its people, society and tradition, education in Japan-key to Japan’s development”,” secrets of Japan’s economic development”, and “Japanese culture and Japan-Pakistan relationship”.

Moreover, he expressed his views on secrets beyond economic development of Japan.

The senior diplomat said that Japan has transformed its society through modern education to acquire the level of modern technology and innovation. And We established education institutions to equip our youth with modern innovative education.

He said that “these are the reasons beyond the modernization and development of Japan, we achieved through a strong education base, harmony and peace in our society.”

Shindo Yusuke said that Japanese have a high rate of saving culture and the government also provides long term credit to support the people for different small and medium businesses.

The Japanese government, he said has maintained fiscal discipline in the country and the county also positively retained its exchange rate to strengthen local currency for timely return of credit provided by the international financial institutions including the World Bank.

To a question, he said that Japan is now the world’s third biggest economy in the world with $5.15 trillion Gross Domestic Product (GDP) and in spite of all the challenges has achieved the agenda of economic growth through technology and innovation.

The diplomat also updated the audience on Japanese Socio- Economic Cooperation with Pakistan.

H said that Japan has always extended economic cooperation including the areas of health, education and infrastructure in its 70 year history of diplomatic and economic ties.

Deputy Head of Mission, Embassy of Japan said that Japan has supported Pakistan. It established Children hospital in Pakistan Institute of Medical Sciences (PIMS) in 1984 which was inaugurated by the then Prime Minister of Japan, Yasuhiro Nakasona.

Japan also financed the different infrastructural projects in Pakistan in all four provinces for development and prosperity in the country.

He said that Japan wants to extend cooperation for economic and infrastructural development and human security including education and health are the main areas of future collaboration between both sides.

The senior diplomat said that increasing Pakistan exports to Japan, bringing investment by Japanese companies in local market and human resources skilled through labor import to Japan would be a future pillar of economic cooperation with Pakistan.

He said that Japan sees a huge opportunity to cooperate with Pakistan in Agriculture and tourism with Pakistan through transfers of technology and investment in local potential sectors.

He said that Pakistan has huge potential in tourism, where they need to provide facilities for foreign tourists including transport and hotel facilities to persuade them for the growth of local tourism industry.

While giving his views on the human recourse, import from Pakistan, he said the Japanese government has initiated processes of importing skilled manpower from Pakistan in 14 different sectors aimed to providing employment opportunities for Pakistanis labor force.

He said that in Japanese Market, Pakistan has a huge share in importing 3, 45 000 skilled manpower from 10 countries of the world as current scenario, Japan was facing shortage of labor force.

The senior diplomat said that three different categories were part of the plan including Technical Intern, ‘Specified Skilled Workers’ and highly skilled professional.

Yusuke Shindo said the Government of Pakistan (GoP) had nominated National Vocational and Technical Training Commission (NAVTTC) and National University of Technology (NUTEC) for carrying out necessary service including recruitment of candidates in collaboration with Japanese counterparts.

Senior diplomat said that the process of recruitment would continue every year for the next five years to import the labor according to the Memorandum of Cooperation (MoC) signed between Japan and Pakistan on December 23, 2019 in Islamabad.

Mentioning the skilled and language proficiency for all three categories, he said that purpose of first category of ‘Technical Intern Training’ program is to transfer technical skills, techniques and knowledge to foreign countries including Pakistan, through an experience of ‘On Job Training (OJT) to contribute to the human resources development in Pakistan.

For this program, he said that Japan and Pakistan have also signed a Memorandum of Cooperation in February 2019 in Tokyo.

He informed that the foreign nationals, who have successfully completed “Technical Intern Training” are exempted from tests that are normally required for the other two categories.

He said that for this program both sides had signed the Memorandum of Cooperation (MoC) in last December 23 and through this agreement foreign national have to prove their necessary level of skill and Japanese language proficiency by appropriate means such as passing skills and language test in different 14 skilled sectors accordingly.

While informed that the third category of highly skilled covers a variety of fields including engineering, specialist in humanities and international services.

He said that Information Technology (IT) software engineers are included in this status of residence.

He also praised the Pakistani workers who were working in Japan, saying that they were more skilled and working with full commitment and honesty.

Japanese envoy said that professional skills and proficiency in Japanese language would be must for workers to work in Japan under this policy.

Senior diplomat said that Japan and Pakistan have enjoyed historical diplomatic and economic relations, where Japan has always supported Pakistan in every situation.

Replying to another question, the ambassador said that Pakistan and Japan are looking for increasing bilateral cooperation in agricultural-based industry and value addition.

Interior Minister briefed on steps for maintenance of peace in Sindh