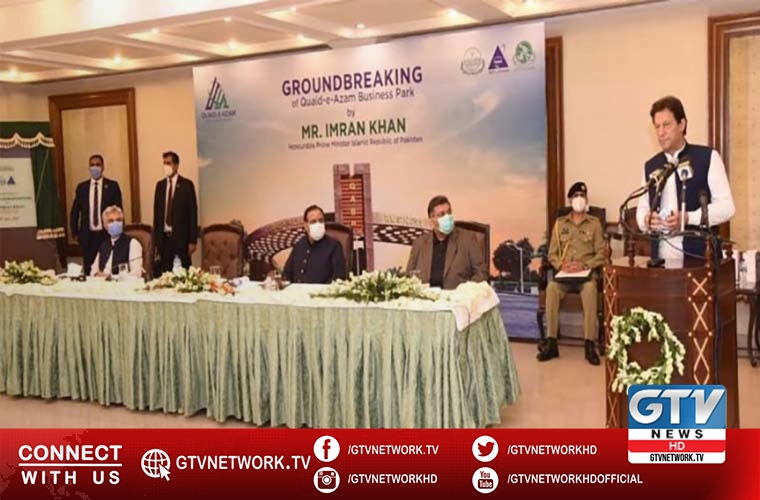 Prime Minister Imran Khan said that no nation in the world could aspire to excel or become successful without industrialization.

He said this, while speaking at the ground breaking ceremony of Quaid e Azam business park as a chief guest.

The PM assured that the government would fully facilitate the small and medium industries, businessmen and industrialists with initiatives like ease of doing business.

During 1960s, the country had been leading the region in terms of industrialization but afterwards lagged behind due to certain short-term policies.

Imran Khan referred to Singapore. He said it had $ 50,000 income per capita. Those countries had planning but we lacked it. The countries like Malaysia and Korea borrowed the plans of industrialization and excelled, but Pakistan lagged behind.

“Our only focus was on winning elections and short-term planning. I have strong conviction that our nation possessed huge potential in the whole region. During 60s, predictions were right that Pakistan could lead the region,” he added.

The prime minister appreciated the business-friendly steps taken by the Punjab government and said setting up nine economic zones and incentives laden package by the provincial government were the steps in the right direction.

He also appreciated the Punjab chief minister for the site of the park with Faisalabad and Lahore as being the two major hubs of business and assured him that the federal government would resolve all their issues.

The prime minster referring to complexities of systems in the country, further regretted that unfortunately, it was hampered with red tapes leading to its degeneration. Such hurdles created holdups in the way of development.
Sharing his experience while spearheading the affordable housing projects initiative for the common man, he said that an inbuilt system existed which did not let anyone to work easily and without hurdles.

The prime minister cited  construction of 5 million affordable houses for the low-income groups as his government’s flagship programme.

He further said that during the last few months, he was personally supervising the initiative and regretted that difficulties in the system had chocked the development pace.

Battle within the system

There was a battle within the system. For the common man wanted to start his small business, difficulties had been created through intricate system which often led to individuals’ discouragement, he added.

The prime minister recalled his stay in the United Kingdom.

He said during his stay for studies or cricket activities, he saw how common man from Pakistan excelled.

They excelled after setting up their small business there, because the system had facilitated them.

He said for the first time in the country’s history, his government had given incentives to the construction industry.

The prime minister assured that the government would provide all possible facilities to the small and medium industries to grow.

He said results of these policies might take some time but a right direction had been set.

He further informed that numerous Chinese companies showed keen interests in this park. But they wanted simplification of procedures. He termed the setting of one window operation in the Quaid e Azam business park a right step to facilitate the investors and industrialists.

Earlier, speaking on the occasion, Punjab Chief Minister Sardar Uman Buzdar said that Quaid-e-Azam business park spread over an area of 1536 acres with space for 653 small and medium industrial units and located near to Lahore and motorway.

About 5,000 people would get jobs from this initiative, he said and informed that Rs 56 billion tax relief was provided by the provincial government due to coronavirus.

Other initiatives aimed at ease of doing business were taken, besides Rs 12 billion were being provided to young people to start their businesses. Different development projects were in the pipeline including Khanki and Thal canal, he added.

Buzdar said due to efficiency and transparency of these projects, the opposition could not single out any scandal.