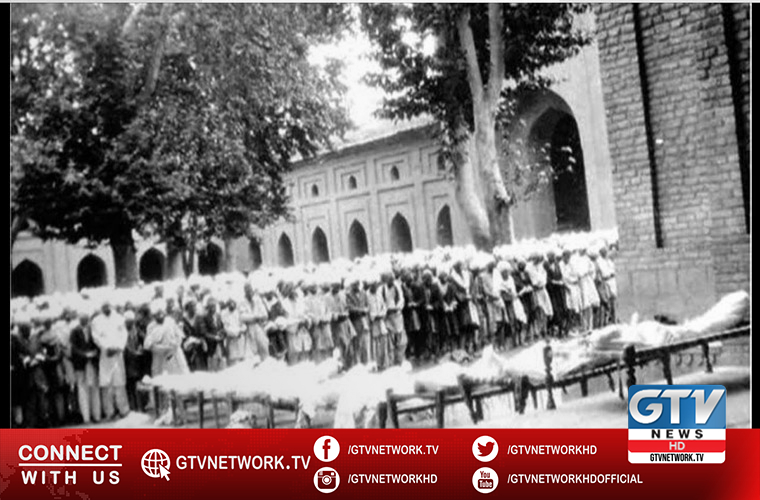 They will observe the day on both sides of the Line of Control and world over.

In occupied Kashmir, the All Parties Hurriyat Conference has appealed to the Kashmiri people observe a complete strike in the territory.

On the 13th July 1931, the troops of Dogra Maharaja had killed 22 Kashmiris, one after the other, outside the Central Jail in Srinagar. They perpetrated this crime during the court proceedings against one Abdul Qadeer who had asked the Kashmiri people to defy the Dogra rule.

Meanwhile, the APHC spokesman issued a statement in Srinagar.

It said that on 13th July 1931, when it was time for Namaz-e-Zuhr, a young man, started the call for prayer (Azaan) but Maharaja’s soldiers shot dead him.

Thus, 22 youth sacrificed their lives till the completion of Azaan.

Moreover, the spokesman said the the strike call aims to stress the urgent need for a peaceful and just solution to the Kashmir dispute.

It also aims to end the cycle of oppression against the Hurriyat leaders and the Kashmiri people.

He also appealed for a march towards the Mazar-e-Shuhada, Naqshband Sahib in Srinagar, the burial place of the martyrs of 1931.

Meanwhile, President of Azad Jammu and Kashmir, Sardar Masood Khan has called for settling the long standing Kashmir dispute under the UN Security Council’s resolutions and as per the aspirations of Kashmiri people.

In an interview, he said we should use the platform of the United Nations because it is relevant to the Kashmir issue.

He said that as citizens of Pakistan, we are ready for the diplomacy of any kind to resolve the issue.

The AJK President further said starting point of such diplomacy should be the United Nations Security Council resolutions because these were drawn after prolonged deliberations and should not be set aside.

He said the Kashmiris should also be associated with any direct or indirect negotiations on Kashmir because they are the real party to the dispute.