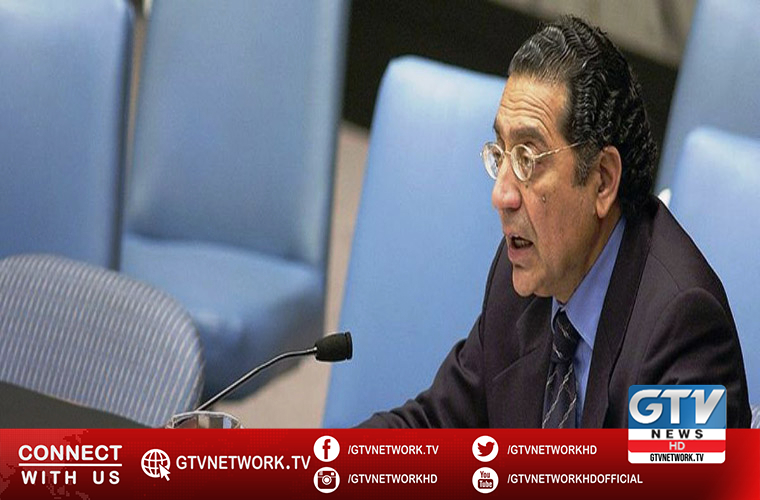 Pakistan calls India the largest and most pervasive purveyor of terrorism in the South Asian region.

The permanent representative of Pakistan to United Nations Ambassador Munir Akram said this, while reacting to Indian allegations.

Pakistan calls India the largest and most pervasive

He told this to delegates taking part in a virtual United Nations-sponsored webinar on ‘the Global Scourge of Terrorism’.

He hit back at India’s terror accusations, branding that country whom Hindu nationalists rule as the “largest and most pervasive purveyor of terrorism” in the South Asian region.

“It (India) has used terrorism as an instrument of its coercive policies against every one of its neighbours and against its own Muslim population,”

The Pakistani envoy was responding to Indian delegate Mahaveer Singhvi’s allegations on Wednesday that Pakistan was sheltering and supporting terrorists and distorting the situation in Indian occupied Kashmir, which has been under a repressive military lockdown for the past 10 months.

Ambassador Akram said India was involved in at least four different types of terrorism, and urged the international community to prosecute those Indian civil and military personnel who had carried out war crimes in Kashmir.

India’s state terrorism had intensified since August 5, 2019 lockdown of 8 million Kashmiris in the Valley, with the imprisonment of all political leaders; the abduction and torture of 13,000 Kashmiri youth; brutal force against peaceful protestors; collective punishments and extra-judicial killings, the Pakistani envoy said.

He pointed out that the UN Special Rapporteurs of the Human Rights Council on Torture, Extra-Judicial Executions and Terrorism had jointly declared that India’s anti-terrorism legislation was incompatible with international human rights law.

They have repeatedly sought answers from India about the numerous extra judicial killings, abductions and prosecutions, most recently last week, but India had failed to provide any answers. “The international community should seek to prosecute the Indian civil and military personnel involved in the state terrorism, war crimes and crimes against humanity, in occupied Jammu and Kashmir,” Ambassador Akram added.

The UN Monitoring Team had confirmed that these organizations were involved in cross-border terrorist attacks against Pakistani military and civilian targets, with the TTP responsible for the terror attack which killed 142 school children in Peshawar. Pakistan had submitted the names, with evidence, of several Indian terror masters to the 1267 (UN Counter-terrorism) Committee, including Ajoy Mistry, Angara Appaji and Gobinda Patnaik, he said, adding, “We hope the 1267 Committee will put them on the terrorism list.

Ambassador Akram said that India was also financing and organizing mercenary terrorist organizations in the ungoverned areas to attack Pakistan and impede the China-Pakistan Economic Corridor (CPEC). These terrorist attacks include the one against the Chinese Consulate in 2018 and against the Pakistan Stock Exchange in Karachi last month.

Moreover, he cited India’s National Security Adviser Ajit Doval has proclaimed that India will pay mercenary terrorists more than anyone else to destabilize Pakistan.

That point out that the captured Indian spy, Kulbhushan Jadhav had confessed to organizing such terrorism.

“Mr. (Narendra) Modi, a lifelong RSS member, was responsible, as Chief Minister, for the 2002 Gujrat pogrom in which 2000 innocent Muslim children, women and men were killed.

“Last April, the BJP-RSS members perpetrated another pogrom against Muslims to punish them for protesting against India’s discriminatory citizenship laws, killing thousands of innocent Muslims, destroying their homes and desecrating their mosques.

“This is terrorism under any national definition,” he added.

The slaughter in Christchurch last year, and in New Delhi this February, the Pakistani envoy said, were the consequence of the consistent propagation of the ideologies of hate against Islam and Muslims by right-wing ideologues.

Hence, Munir emphasised it is time that the world unites to confront these hateful ideologies, just as we have confronted the despicable acts of ISIL and Al-Qaeda and their associated terrorist groups.

Food goods transport to be restored in view of current situation