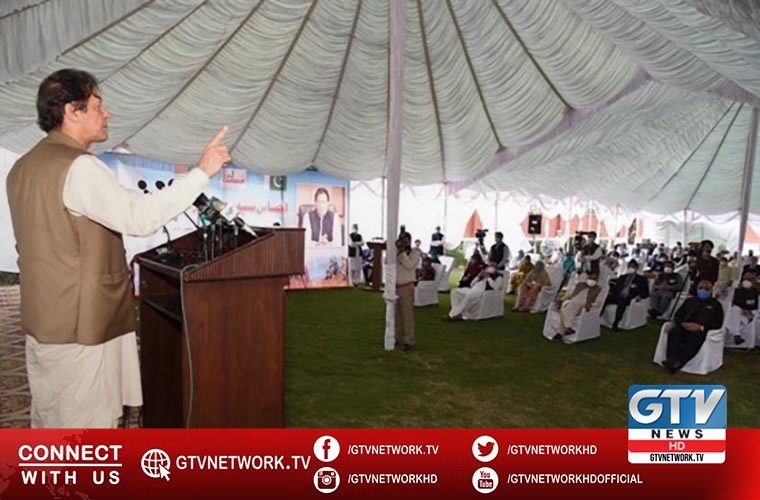 He this this, while addressing the launching ceremony of Ehsaas Emergency Cash Programme for the families living along the Line of Control on Friday.

The PM said the the Rashtriya Swayamsevak Sangh (RSS) was the production of Hitler’s Nazi party which was pushing India towards the Muslim genocide.

He called Modi a psychopath who is not a normal person.

They consider them a follower of the Nazi party and regard that as their role model. That is why they do such acts,” the prime minister

On the prime minister’s directive, all the 138,275 families of 219 villages have been declared entitled for the emergency cash assistance.

The families would receive monthly stipend of Rs 2,000 besides an emergency cash of Rs 12,000 to be given to the women of the said households.

Besides, the entitled families also attended.

Imran Khan, who earlier also distributed cheques among the entitled people, said though the Indian Occupied Jammu and Kashmir (IOJK) had been facing Indian aggression for long, the Modi regime with the RSS mindset of Hindu supremacy had surpassed all.

Referring to the International Day in Support of Victims of Torture being observed Friday, he said in the IOJK, the occupation forces had used pellet guns, picked up youths, tortured men, women and children, besides killing and burying scores of people in mass graves.

He said the cruel people were usually cowards, who oppressed the helpless ones as they could not fight. Similarly, he said India had deployed around 900,000 troops in the IOJK to suppress eight million Kashmiri people.

The prime minister said it was Modi, who had ordered the killing of Muslims in Gujarat and expelled around 100,000 Muslims from their homes when he was the chief minister.

Similar to Modi, he recalled, Hitler’s Nazi party had also initiated from promulgating discriminatory laws which followed the genocide of Jews and other communities.

“This is actually heading towards genocide,” he remarked.

RSS mindset and their aggression in the IOJK

Imran Khan said he had been apprising the world leaders of the RSS mindset and their aggression in the IOJK as well as Muslims and other Indian minorities.

While praying for strength to the IOJK people to face the Indian oppression, the prime minister assured them of Pakistan’s support at every international forum.

He said ahead of August 5, the anniversary of the unilateral Indian action to annex the IOJK through legislation, Pakistan would create a momentum across the world to highlight the illegao Indian actions of August 5, 2019.

The prime minister also assured the families living along the LoC of Pakistan’s support.

He said despite tough economic conditions and low revenue generation owing to the COVID-19, the government had increased the development budget for Balochistan, AJK, Giglit Baltistatn and the merged tribal districts of Khyber Pakhtunkhwa (KP).

It had also decided to provide health cards to the whole population of AJK and KP’s tribal districts to give them a health insurance cover, he added.