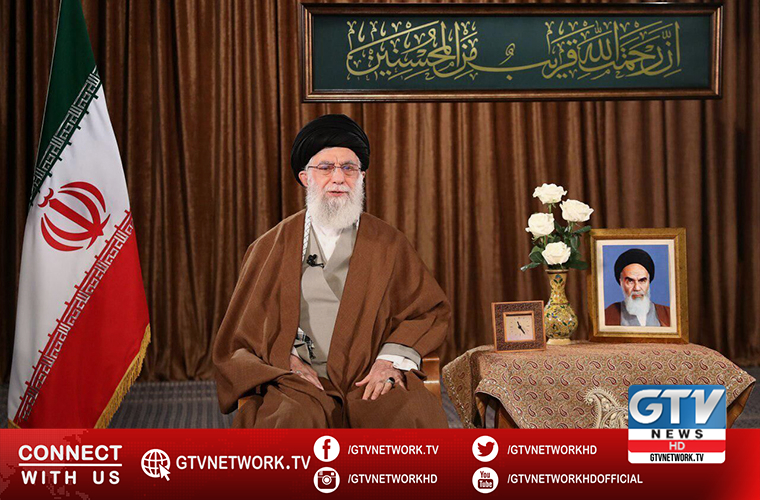 US administration disgraced due to its behavior, says Ayatollah Khamenei, the Supreme Leader of the Islamic Revolution.

He made the remarks while addressing the nation live on TV on the occasion of the 31st demise anniversary of Imam Khomeini.

Ayatollah Seyyed Ali Khamenei said the people’s slogan of #ICantBreathe can be heard in the massive protests throughout the US.

He said it also represents the heartfelt words of all nations against which the US has committed many atrocities.

US administration disgraced due to its behavior

“The US govt was disgraced due to its behavior. The corona outbreak started later in the US than other countries, they benefitted from other nations’ experience, and they could have prepared, but they failed to manage Corona properly due to the corruption of their govt.”

Ayatollah Khamenei said what is being witnessed in US cities today is a result of realities that had always been kept concealed.

However, today these have been revealed leading to the disgrace of the US government.

“In dealing with its people, the US government has behaved in the worst manner. They kill people and yet claim they advocate human rights. Was not the black man whom you murdered a human being?”

“The people of the United States have every right to feel embarrassed and ashamed by their governments, particularly the current government.”

He hailed the charismatic character of the Late Founder of the Islamic Republic Imam Khomeini and said he managed to initiate the greatest changes in his time.

The Supreme Leader further commented on the demise anniversary ceremonies.

He noted that the content, not the form is the most important item in holding tributes to the Late Imam Khomeini.

He further said the Late Imam is still very much alive in the minds and hearts of people despite lapse of many years since his passing away.

Meanwhile, he highlighted “appeal for change” as the most basic characteristics of the Late Founder of the Islamic Republic Imam Khomeini and said that “Imam caused the U.S. presidents to say themselves that Khomeini had humiliated them.”

Outlining the most outstanding characteristics of the Late Founder of the Islamic Republic, he highlighted his multi-faceted character the most notable of which the Leader described as his search and appeal for change.

Ayatollah Khamenei further stressed that the Late Imam was not a mere instructor or rhetorician but functioned as a commander who went to the very heart of operations and was a “leader” in the true sense of the word.

He further pointed to the new methods the Late Imam Khomeini used in changing people’s minor and insignificant demands into more important ones regarding the country’s most basic issues like non-independence on any world powers.

He further outlined many other changes the Late Imam initiated like the way people regarded world powers and the superpowers.

At that time, no one even imagined questioning the US power and never thought of doubting its power. Or, doing things which could go contrary to the US will, he said.

Supreme Leader stressed that Imam Khomeini acted in a way that even the US presidents themselves admitted that he had humiliated them. And that was the true reality.

The Late Imam and his young followers and admirers managed to humiliate the superpowers in the true sense of the word.

They managed to break the authority of the superpowers, defeat them and expel them from the scene.

Ayatollah Khamenei has given a speech every year for the large crowd of people who gathered at the mausoleum of the late Imam Khomeini to pay tribute to the founder of the Islamic Republic. But this year, the ceremony at the mausoleum is canceled due to the restrictions imposed to contain coronavirus disease (COVID-19).

His charismatic character and political approach inspired many leaders and popular uprisings against dictator powers across the world.