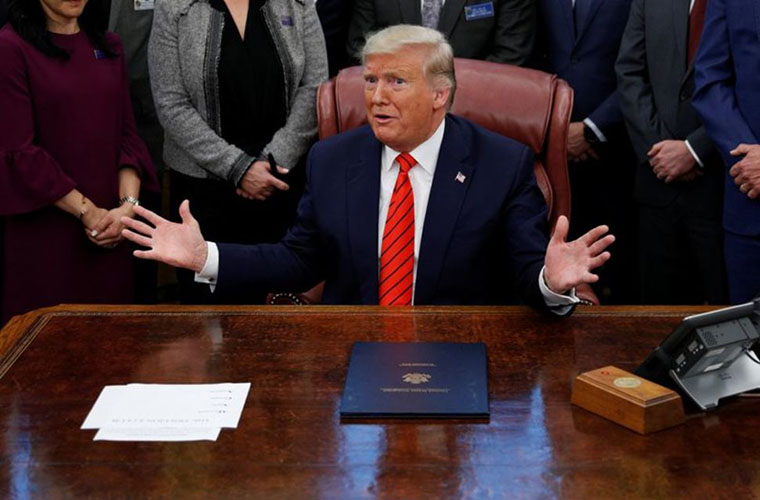 President Donald Trump downplayed the escalating national crisis.
His comments at Thursday’s afternoon briefing underscored the growing duality of the fight: While the President is telling a tale of great successes, of a government powerfully mobilizing, front-line health care workers are facing gruesome scenes in hospitals in a growing number of hot spots.
Later, ignoring traditional codes of the presidency at a time of trial, the President lashed out in a TV interview at Democratic governors channeling appeals from overwhelmed health care workers in their home states as Covid-19 exacts an increasing toll.
And he appeared set on contradicting the advice of one of his top task force members, Dr. Anthony Fauci, who told CNN that only the virus can set the timeline for reopening the country.
All the evidence of the virus’s advance, seen in rising death tolls and infection figures, suggests the situation is getting worse and that normal life could be weeks or months away. Once, Trump minimized the looming impact of the crisis. Now his assessments conflict with the reality of its deadly march.

On Thursday, a day that saw more reported deaths from Covid-19 than ever before in the United States — Trump bizarrely turned the focus to what he said was a far lower mortality rate than he had expected.
A week ago, there were a total of 8,800 confirmed infections in the United States and 149 deaths.
On Thursday, that figure reached more than 82,000 with nearly 1,200 deaths. Were those figures the result of a hurricane or a terrorist attack, their human toll would be more obvious, and it would be more difficult for the President to spin the situation.
But as people die unseen in hospital wards and emergency rooms, the emotional impact of the accelerating tragedy is less obvious than it would be during a natural disaster.
Still, the weight of the data is beginning to tell its own story.
The US overtook China on Thursday as the nation with the most confirmed infections. Yet in a White House news conference, Trump expressed hopes that the nightmare would not last “much longer.”

Later, he took to the comfortable surroundings of Sean Hannity’s show on Fox News.
He rebuked New York Gov. Andrew Cuomo for saying this week that his state needed 30,000 extra ventilators to cope with the coronavirus surge — suggesting his longtime sparring partner was asking for machines he didn’t need.
After it emerged that Washington Gov. Jay Inslee had criticized the federal response on a call with governors and the President earlier Thursday, Trump blasted his critic as a “failed presidential candidate.” And as officials in Michigan registered increasing concern about a building crisis in the Great Lakes State, the President hit out at Gov. Gretchen Whitmer, saying “all she does is sit there and blame the federal government.”

As doctors say they still lack sufficient masks and other protective gear, Trump had earlier in the day read out a list of equipment delivered by federal authorities, giving the impression there was more than enough.
Despite the clearly widening spread of the pandemic, which by definition cascades across wide geographical areas and reaches peaks in each hot spot at different times, Trump intensified a push to reopen the economy, saying he would issue a relaxation of some social distancing guidelines next week.
And he stressed repeatedly that nobody could have foreseen the possibility of the pandemic, despite warnings issued by the US intelligence community earlier this year.
Any president and any administration would have been battered by the task of combating a generational pandemic involving a virulent “invisible enemy,” as Trump calls it.
But it’s unlikely any other modern administration would spend so much time praising its own performance — even as the crisis magnifies by the day.

“I think they think we’re doing a really good job in terms of running this whole situation having to do with the virus,” Trump said at the White House, referring to the American people. “I think they feel that myself and the administration are doing a good job. … There was a lot of fear and a lot of good things are happening.”
he President spoke on a day when New York’s crisis over the coronavirus deepened and another disaster began to unfold in New Orleans, while California slipped into worse trouble and new hot spots appeared to be emerging in Chicago and Detroit.

One doctor in New York warned of “apocalyptic” scenes at her hospital, a lack of protective equipment for staff and a refrigerated truck brought in to hold bodies, in comments to The New York Times.
But Trump sought to minimize the lethality of the virus.
“A lot of good things are happening. The mortality rate is, in my opinion … way, way down,” the President said. “That takes a lot of fear out. It’s one thing to have it. It’s another thing to die. When I first got involved, I was told numbers much higher than the number that seems to be.”
The President’s comments, on a day when more than 200 Americans were reported to have died, risked coming across as callous.
They also minimized the impact of the crisis. The coronavirus is so problematic because even if it kills only 1.5% of the people who get infected it is highly contagious, has no vaccine and humans have no immunity to it.
That means rising cases risk crashing the US hospital system, overwhelming available equipment and forcing doctors — who are risking their own health and lives to treat patients — to choose who lives and dies.
GTV