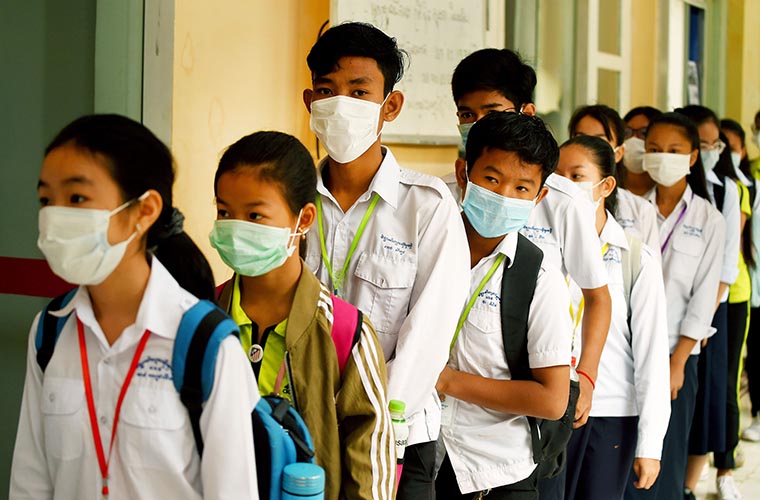 Over 290 million students miss school due to coronavirus, according to UNESCO.
The U.N. agency dealing with promoting education give this figure while calling it unprecedented.

They negatively impact learning achievement; decrease economic productivity, as parents struggle to balance work commitments with childcare; and compound inequality, as disadvantaged families tend to have lower levels of education, and fewer resources to fill learning gaps.
Other negative consequences include poor nutrition (many children rely on free or discounted school meals), unintended strains on health-care systems (women represent a large share of health-care workers in many countries, and often have to miss work when schools close, in order to take care of their children), and lead to higher school dropout rates (it is a challenge to ensure children return to school following closures).

Ms. Azoulay said that UNESCO is working with countries to ensure continuity of learning for all. The agency is helping to implement large-scale distance learning programmes and plans to convene an emergency meeting of education ministers next week.
“This is not a drill. This is not the time to give up. This is not a time for excuses. This is a time for pulling out all the stops”.

During his COVID-19 update to the media, Tedros Adhanon Ghebreyesus, the head of the World Health Organization (WHO), warned that some countries are either not taking the outbreak seriously enough, or have decided that there is nothing they can do to stop it.
Tedros insisted that the epidemic can be pushed back, but only if there is a “collective, coordinated and comprehensive approach that engages the entire machinery of government”.
Noting that countries have been planning for similar health scenarios for some time, the WHO chief called on them to activate their plans, and for “leadership from the top, coordinating every part of government”, including security, diplomacy, finance and transport.
Over the latest 24-hour reporting period, China reported 143 new cases, most of them in Hubei province. Outside of China, 2,055 cases were reported in 33 countries. This brings the total number of global cases to 95,265, with 3,281 deaths.

One hundred and fifteen countries have not reported any cases.
Concerns surrounding the spread of COVID-19 were partly responsible for world food prices falling in February, the Food and Agriculture Organization (FAO) said on Thursday.
According to the UN body, food commodity prices dropped by one per cent last month, the first downward shift in four months, driven by a sharp fall in the export price of vegetable oils, whose index saw a more than 10 per cent reduction from January.
In other food sectors, cereals saw price falls of just under one per cent, meat was down two per cent, but dairy products rose by more than four points amid reduced output in Australia.
By contrast, milk powder prices suffered owing to slowing demand in China, the world’s largest milk powder importer.
GTV