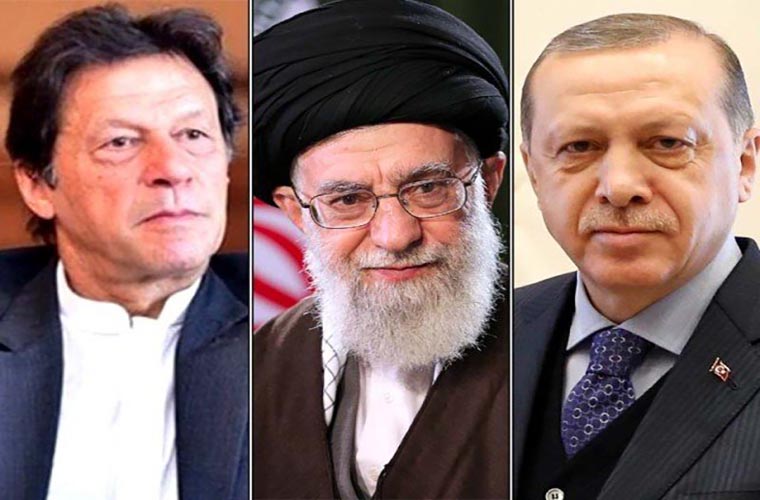 PM thanks Iran Supreme Leader and Turkish President for Muslims of India and Kashmiris.

“I want to thank Supreme Leader Khamenei, & President Erdogan, for speaking against the oppression & massacre of Muslims in India & Kashmiris in IOJK by the Hindu supremacist Modi regime,” the prime minister said in a tweet.

He said it was sad to see that few voices from the Muslim world were speaking out and condemning it, while more voices were being raised in the West condemning the Hindu supremacist Modi regime’s massacre of Muslims in India and Kashmiris in IOJK.

The Supreme Leader of Iran Ayatullah Khamenei Thursday asked the Indian government to confront the extremist Hindus and stop the massacre of Indian Muslims to prevent its isolation from the Muslim world.

The Iranian Supreme Leader, in a tweet, said the hearts of Muslims all over the world were grieving over the massacre of Muslims in India.

He said while reacting to the ongoing riots in New Delhi against the discriminatory citizenship law, which had so far claimed 46 lives and left more than 200 injured.

“ The govt of India should confront extremist Hindus & their parties & stop the massacre of Muslims in order to prevent India’s isolation from the world of Islam,” Khamenei tweeted with a hashtag #IndianMuslimslnDanger.

The tweet by the Iranian leader came two days after the Iranian Ambassador in New Delhi was summoned to lodge a protest over Iranian Foreign Minister Javad Zarif condemning the “wave of organized violence against Indian Muslims.”

“For centuries, Iran has been a friend of India. We urge Indian authorities to ensure the well being of ALL Indians & not let senseless thuggery prevail. Path forward lies in peaceful dialogue and rule of law,” Zarif tweeted on Monday, which had not gone well with the Indian authorities.