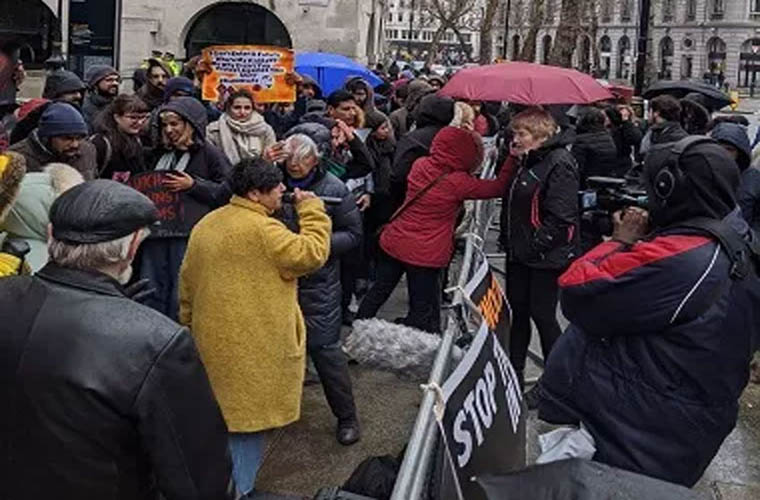 During that hurriedly-called protest, they slammed BJP government over the Citizenship Amendment Act and the associated violence.
Such demonstrations were also held in seventeen cities across Europe, including Paris, Berlin, Brussels and Geneva, with the central message of “We stand in solidarity with the victims of communal violence in Delhi”.
Addressing the protestors, speakers said if the world does not take note and react urgently, the consequences will be disastrous.
The protesters demanded resignation of Indian Home Minister Amit Shah for his failure to maintain peace, and the arrest of BJP politicians for instigating the violence..
Five Indian protesters killed over protest against citizenship law

Earlier, US President Donald Trump again offered to mediate while addressing a joint press briefing with Indian Prime Minister Narendra Modi in New Delhi.
The US President said I will do whatever I can do to help because my relationship with both gentlemen, Pakistani Prime Minister Imran Khan and Prime Minister Modi is so good.
And if anything I can do to mediate, I will do, he said.
However, he parried the question regarding Modi government’s move to end special status to Jammu and Kashmir and the massive restrictions since August, including a communication and security lockdown in Occupied Kashmir.
The journalist also sought his viewpoint on Modi govt’s measures, inclduing detention of hundreds of politicians udner custody.
But President Trump said: “I think India, Pakistan will work out their problems.”
Meanwhile, an analyst noted it shows emptiness of his mediation offer since India remains stick to its position.
He said if both countries have to work out it bilaterally then what does Trump mean for his mediation offer.
GTV