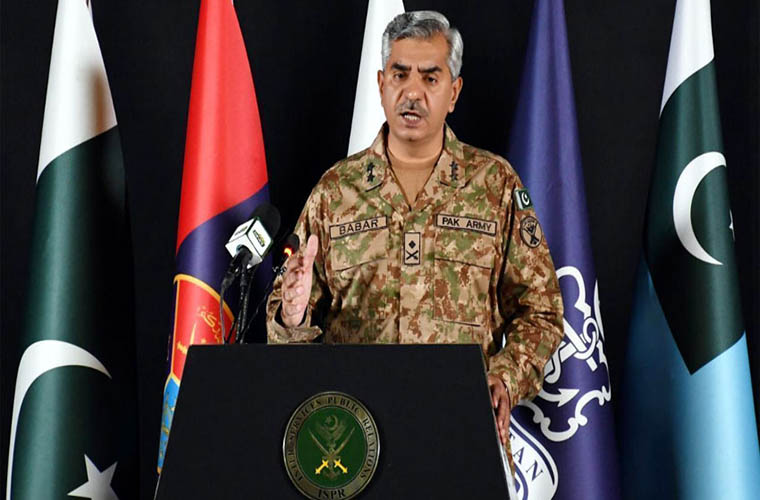 However, the armed forces are fully capable and prepared to respond to any aggression or misadventure by India, he said.

The DG ISPR warned that if Pakistan’s sovereignty is challenged, the country will respond with full force.

He said there is no space for a war between two nuclear powers because it will have uncontrollable consequences.

He said the region cannot afford any war. Therefore, he said, Pakistan has always adopted the path of peace.

Nonetheless, the armed forces of Pakistan are ever ready to respond to any aggression.

Major General Babar Iftikhar said India carried out a failed and cowardice attempt to attack Pakistan on February 26 last year, and in response, its two planes were shot down and a pilot was captured.

He said February 27 carries the status of a golden chapter in Pakistan’s history because every Pakistani became proud on that day.

He said the enemy’s designs were foiled on this day. He also dedicated 27 February to all the martyrs who sacrificed their life in the line of duty.

DG ISPR said it is a day of thanksgiving as the armed forces came up to the people’s expectations, and also to reaffirm the resolve to defend the motherland.

Referring to the constant threats on the eastern border, the DG ISPR said Indian forces have been committing ceasefire violations on the Line of Control, putting the regional peace in danger.

He said India carried out 384 ceasefire violations during the current year in which two civilians were martyred and 30 others sustained injuries.

He said even innocent school children are targeted by the Indian forces in Azad Kashmir. He said Pakistan Army responds to the Indian aggression along the LoC in a befitting manner.

However, he said, being a responsible and professional army, Pakistani troops only target Indian forces across the LoC.

Talking about the grave human rights violations in occupied Kashmir, Major General Babar Iftikhar said Indian forces have been carrying out tyrannies against armless people of Kashmir for 73 years.

He said India’s illegal and immoral steps of 5 August 2019 in occupied Kashmir have added miseries of the Kashmiri people.

He said there had been complete lockdown in occupied Kashmir for 207 days and the life has been paralyzed.

DG ISPR said Kashmir issue has been internationalized, and India’s state terrorism in the held territory is being highlighted by the international media despite restrictions.

He said the UN Secretary General has also expressed concern over human rights violations in occupied Kashmir and emphasized on resolution of the dispute according to the UN resolutions.

He said solution to Kashmir issue is not only Pakistan’s national interest but also guarantor of national security.

Regarding war on terrorism, the DG ISPR said Pakistan successfully fought the war on terror during the last 20 years.

He said over 1200 small and big operations were carried out in which 17,000 terrorists were killed.

He said Operation Radd-ul-Fasaad has been continuing to achieve stable, peaceful and normalized Pakistan.

Maj Gen Babar Iftikhar said writ of the state has been reestablished across the country.

He said Pakistan paid a heavy price in the war on terror sacrificing 80,000 lives and suffering economic loos of 180 billion dollars.

Answering a question about the upcoming peace deal with the United States and the Afghan Taliban, Major General Babar Iftikhar hoped the agreement will have positive impact on the region as Pakistan strongly supported the Afghan-led peace process.

To another question, he said the international community is standing with Pakistan’s stance on de-escalation in South Asia and appreciating Islamabad’s positive role in this regard. He said US President Donald Trump acknowledged Pakistan’s role in his recent visit to India saying that Pakistan is very closely working with the United States for regional peace.

Senators call for focus on democratic norms during their farewell speeches