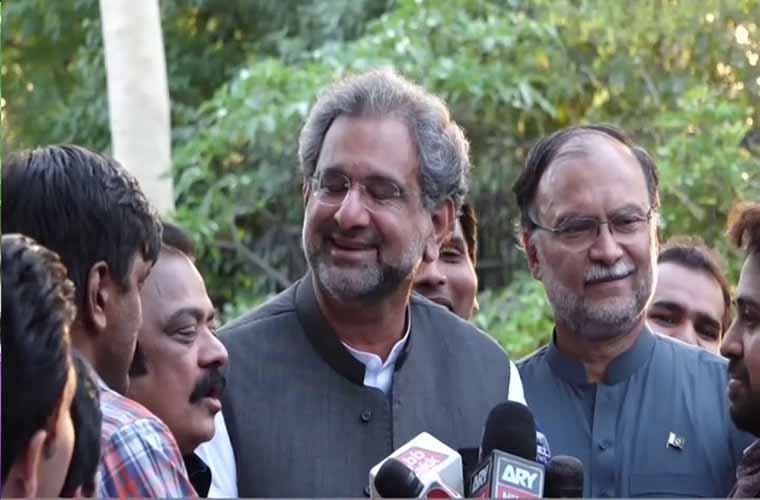 Supporters of of Pakistan Muslim League-Nawaz (PML-N) accorded warm welcome to the PMLN leaders with garlands.
They also showered them with rose petals

The court also directed them to submit surety bonds amounting Rs10 million each.

Meanwhile, IHC Chief Justice Athar Minallah said in his remarks that the PML-N leaders cannot be kept under custody without any reason.

He called barring them unnecessarily as misuse of power.

Furthermore, IHC asked “Why should Ahsan Iqbal and Shahid Khaqan Abbasi be kept in prison if the investigation is completed?

“How can Ahsan Iqbal and Shahid Khaqan Abbasi be deprived of representation when people voted for them?

IHC inquired why are those people being punished who voted for Ahsan Iqbal and Shahid Khaqan Abbasi?

Earlier, hearing on bail pleas of former PM and minister postponed until Feb24 due to leave of the IHC CJ.

But, an accountability court had extended judicial remand of Abbasi till March 9 in teh LNG case.

Meanwhile, NAB meeting decided to challenge the bail in Supreme Court of Pakistan.
According to details, Chairman NAB Justice (retd) Javed Iqbal chaired a meeting at NAB headquarters in Islamabad today (Tuesday).
The meeting was attended by Deputy Chairman of NAB, PGA, DG Operations, DG Rawalpindi and other senior officers of NAB.
During the meeting, the accountability watchdog decided to approach Supreme Court against the bail of PML-N leaders.

President calls for enhanced coordination to effectively respond to Covid19