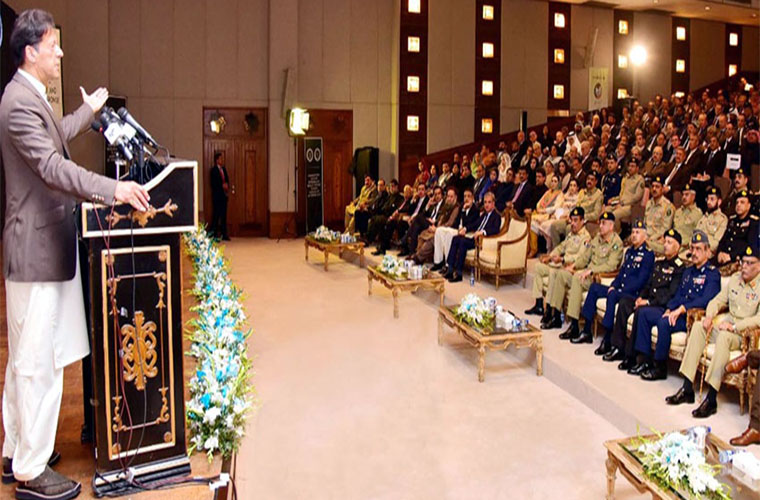 Prime Minister Imran Khan has urged the world community to take notice of Hindutva ideology of India that is based on hatred and racial superiority against minorities.

He made this appeal while addressing a special ceremony in Islamabad today (Wednesday).

The ceremony held in connection with passing of one year of Indian aggression on Pakistan.

PM Khan said the RSS ideology of incumbent Indian government takes inspiration from Nazi ideals of racist superiority and hate for followers of other religions.

The Prime Minister said a racist, fascist and totalitarian ideology has been adopted by Indian government which is leading to violence and bloodshed.

He said the prevailing environment in India is echoing the same situation where hate is being spread against all minorities in that country, leading to communal violence.

Imran Khan said 200 million Muslims are being targeted in India due to policies based on hate.
He expressed fear that the situation will only get worse in India if not checked in time.

Referring to Indian aggression on 26th February last year, the Prime Minister said he feels pride on the way Pakistani nation came out of that crisis.

He said the reason for not aggravating of the situation at that time must be attributed to maturity of Pakistani nation.

The Prime Minister said our armed forces were fully prepared to meet any aggression, but Pakistan side exercised restraint after realizing that there were no casualties in the Indian bombing.

Imran Khan appreciated the response of whole nation, including politicians and media in that crisis.

He said we are proud of our armed forces in their ability to defend the frontiers of the country.

He said our armed forces are battle hardened and they have defeated the menace of terrorism successfully, which has boosted their morale and confidence.

Pakistan responded befittingly to show its resolve and capability.

He said our first message to India is to not consider any ill misadventure against us, as we will respond immediately as self-defence.

The Foreign Minister said Kashmir is an internationally recognized dispute. He questioned if it was India’s internal affair then why it organized a briefing of UNSC members on 15th of last month on Kashmir.

He said the two reports of UN High Commissioner for Human Rights cannot be ignored.

Similarly, the reports of EU and All Parties Group in the British Parliament depict the real situation in Occupied Kashmir.

Referring to Afghan situation, he said we believe there is no military solution to Afghan conflict. It is only negotiated settlement that will bring peace in the neighbouring country.

Shah Mahmood Qureshi said his second message is for international community that drift to bilateralism from multilateralism is dangerous for peace and stability in South Asia.

He said Pakistanis and Kashmiris will never accept the steps taken on fifth of August.

In his third message, he said governments can come and go but consensus on Kashmir remains the same across the board in Pakistan.

In his fourth and final message for armed forces of Pakistan, Shah Mahmood Qureshi said nation is proud of you for rendering sacrifices to defeat the menace of terrorism and defending the frontiers of motherland.