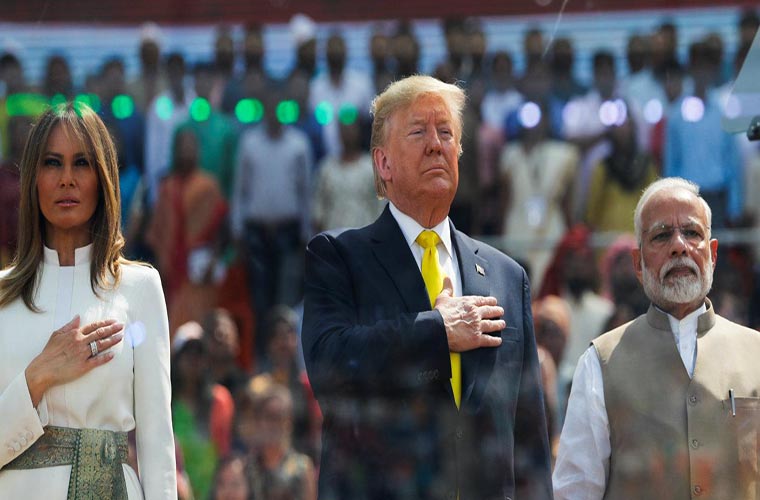 US working with Pakistan in very positive way in fight against terrorism,  US President Trump told India.

According to Radio Pakistan, President Trump said this while addressing a huge gathering in Ahmedabad on arrival on his two-day visit to India.

US working with Pakistan

President Donald Trump said his administration is working in a very positive way with Pakistan to crack down on the terrorist organizations on the border.
He also expressed hope for reducing tensions and bringing stability of the future of harmony, for all of the nations of South Asia.
He also termed relationship with Pakistan as very good one.
Meanwhile, Quartz India also reported that Trump also spoke about the US’s relationship with Pakistan.
India has long viewed the US’s stance on Pakistan as not being critical enough over alleged terror funding and camps.
Trump gloated over the American “victory” over the Islamic State of Iraq and Syria (ISIS) and expressed his resolve to not let terror thrive.
He spoke at length about the “true” India-US friendship, turning briefly into generous adulation of Modi himself.
Trump hailed Modi’s origins as a chaiwaala (tea-seller), “a worker in a cafeteria,” which he said underscored “what this country (India) is capable of.”
He then went on to list Modi’s many achievements: village electrification, internet access, and bringing “12 people out of poverty every minute.”

Having previously called India a “Hindu nation,” Trump, this time, included Muslims in the list of the ethnicities inhabiting the country.

However, that couldn’t hold the angsty crowd from staying back much longer. Midway through Trump’s speech, several pavilions emptied out.
“I sat in the bus at 7am and it (is) now nearly 2pm. Plus I don’t understand what he’s saying,” Praveen Kumar, a resident of outer Ahmedabad, told Quartz in part Gujarati part Hindi.
It didn’t help that Trump’s speech had a live Hindi transcript rolling on the large screen.
Even Modi’s “US-India friendship…long live, long live” towards the end didn’t perk up the mood.
GTV