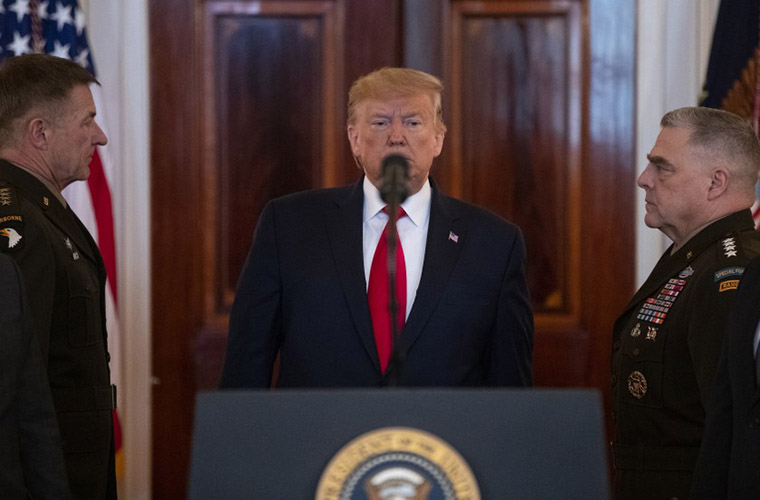 “Yes,” he told reporters at the White House as he prepared to depart on a trip to India. “I would put my name on it.”
His comments came after a partial truce took effect in Afghanistan on Saturday, with the Taliban, US, and Afghan forces agreeing to a week-long “reduction in violence.”
The truce was intended to set conditions for Washington and the insurgents to sign a deal in Doha on February 29 that could ultimately lead to a withdrawal of US forces after more than 18 years.
Trump was not specific about what document he would be willing to sign but said decisions were contingent on progress during the initial truce.
He said the cooling off period has “been holding up. It’s a day and a half. We’ll see what happens.” “I want to see how this period of a week works out,” he said.
“If it works out over the next less-than-a-week, I would put my name on it. Time to come home. And they want to stop,” he said.
“I think the Taliban want to make a deal too. They’re tired of fighting.”
Pakistan government welcomes US Taliban Feb29 deal as good news

Prime Minister’s Special Assistant on Information and Broadcasting, Dr Firdous Ashiq Awan Saturday welcomed it.
In a series of tweets, she commented on signing of deal between US and Afghan Taliban on February 29.
She considered it a good news for peace and stability of the entire region.
Meanwhile, she also commented on another good news.
Awan underlined appreciation Pakistan at Financial Action Task Force (FATF) meeting as a good news for the country.
Moreover, she said that FATF’s remained a bad news for enemies of Pakistan.
GTV