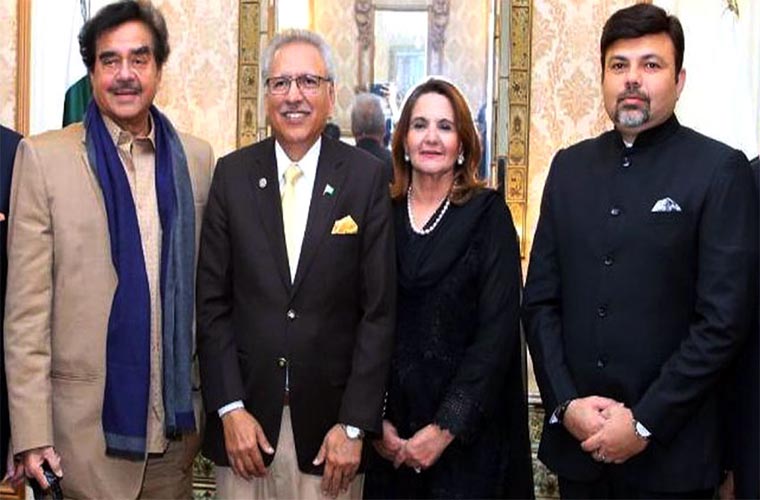 Indian politician and former Actor Shatrughan Sinha meets President Dr Arif Alvi in Lahore today.
While talking to him, the President expressed his deep concern over the human rights violations by Indian security forces in Occupied Jammu and Kashmir.

Moreover, he highlighted the persecution of Indian minorities, particularly Muslims.
He lamented that India (governemnt) was discriminating and oppressing them under Citizenship (Amendment) Act, 2019.
The President also highlighted Prime Minister Imran Khan’s peace overtures.
Unfortunately,  the Modi Government spurned PM Khan’s overtures, he said.
While respojnding to President of Pakistan’s statement that AJK remains completely peaceful area, Sinha proposed that parliamentarians from both sides of the aisle in India should be invited to visit AJK.
However, he made this proposal so that the parliamentarians may see the situation on the ground.
Meanwhile, both agreed that there was a strong need to work for promotion of peace in the subcontinent.

Actor-turned-politician Shatrughan Sinha once again became a piece of discussion in India.
Because he was attending a wedding function in Lahore.
Social media activists also shared videos and pictures of the Congress leader.
Shatrughan Sinha had remained Member of Parliament in India.
According to ANI reports, Pakistani businessman Mian Asad Ahsan invited him to the wedding.
Pakistanis also like Shatrughan Sinha for his bold stance against BJP government’s wrong policies.
Notably, he had reminded Modi govt of worldwide criticism over its CAA and Kashmir related measures.
GTV