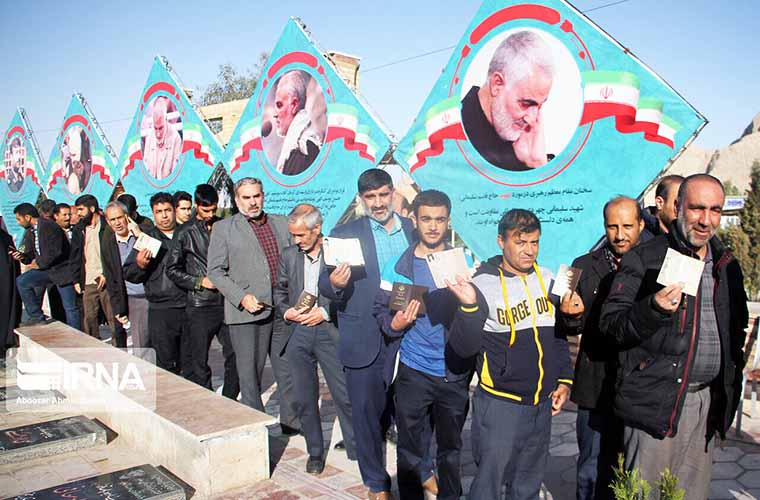 Iran parliamentary elections witness lines of voters at polling stations across the country.
Polling stations opened at 8:00 a.m. (0430 GMT) today (Friday) while Leader of the Islamic Revolution Ayatollah Seyyed Ali Khamenei was among the first to cast his ballot.

Iranians are casting votes in the 11th elections to Parliament and Assembly of Experts.
The voting comes after a one-week election campaign, which officially kicked off last Thursday.
Iranians remain excited while sharing images on social media.
Those images also showed long lines of people standing in front of polling stations waiting to cast their votes early in the morning.

Meanwhile, Ayatollah Khamenei said that these elections mark a day of national celebration.
He congratulated all fellow countrymen across the country on this occasion.
While sharing his views, he said that the day of elections is the day of the fulfillment of the civil rights of the people.
He added that people participate in determining the future of the country for which they are entitled to.
He also called it a religious obligation.
Ayatollah Khamenei said the truth had it that elections guarantee the national interests of the country.
And anyone who is interested in the national interests of the country should vote,” Ayatollah Khamenei said.
He urged voters to turn out early in the day and to vote based on the number of total competing candidates in any given city.
The Supreme Leader concluded his remarks by praying for the country and also thanking the media for covering the event.

Speaking after voting, Iranian President Hassan Rouhani said he “hoped that the best make it to the 11th parliament”.
“What the people demand is a more active parliament which can better focus on resolving the problems which affect their lives,” Rouhani added.
The Iranian president said since Iran’s first parliamentary elections following the Islamic Revolution on March 1980, elections have been held regularly in the country despite times of hardship such as the 1980-88 Iraq war against Iran.
Rouhani added that the late founder of the Islamic Republic Imam Khomeini, “always stressed the need for the elections to be held as scheduled.”
He also said Iran’s parliamentary elections have been held without any interruption of any sort in the last ten years, marking “a unique reality in the history of democracy and of Iran”.

Also speaking after casting his ballot, Iranian Foreign Minister Mohammad Javad Zarif said that “the people are the main backers of the Islamic Revolution.”
Speaking as foreign minister, he said Iran’s diplomacy is also dependent on the support of its people.
Zarif added that Iranians will not allow “someone sitting in Washington to decide for them, specifically someone who has the blood of General Soleimani on his hands”.
He recalled Lieutenant General Soleimani as the region’s most popular anti-terror military figure whom US assassinated in early January while Soleimani was visiting Iraq on official request of Iraqi government.

The voting comes a day after the US imposed sanctions on five senior members of Iran’s Guardian Council which is responsible for supervising the electoral process in the country.
US special representative for Iran Brian Hook – who announced the measures Thursday – accused the officials of preventing free and fair elections.
On Friday, Guardian Council spokesman Abbas Ali Kadkhodaei slammed the sanctions as “sham and illegitimate” measures demonstrating the United States’ disregard for democracy.
He added that the US in fact “desired the region’s dictatorial governments as child-killing regimes, seeing them as cows that can be milked for benefit”.
In a tweet on Thursday, Ayatollah Mohammad Yazdi, one of the sanctioned Guardian Council officials, said that it was his “highest honor” to be sanctioned by “those whose hands were stained by the blood” of top Iranian General Qassem Soleimani.
Speaking on Friday, Secretary of Iran’s Guardian Council Ayatollah Ahmad Jannati mockingly quipped at the sanctions. He said that they demonstrated the “mind paralysis” of those which have imposed them on the Guardian Council members.
“Yes, they sanctioned us and I am now thinking what to do with all the money we have left in the US. We also can’t go to the US for Christmas celebrations any longer,” Jannati told reporters, who laughed in response.
GTV