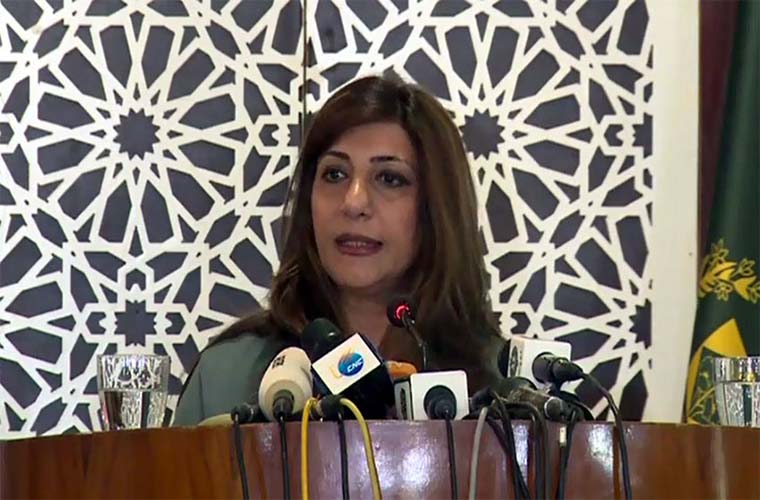 Pakistan hopes US President will raise Kashmir issue during India visit.
Foreign Office Spokesperson Aisha Farooqui expressed hope while addressing the weekly news briefing in Islamabad on Thursday.
She hoped that US President Donald Trump will raise the issue of Kashmir with the Indian leadership during during his upcoming visit to India .

She referred to the offer of mediation which the US President made.
Farooqui expressed optimism that President Trump would take forward it through some concrete practical steps.

The spokesperson said Pakistan welcomes the letter which US Senators wrote to the US Secretary of State.
US Senator drew attention to the plight of people of Indian occupied Jammu and Kashmir.
She said voices are growing around the world calling upon India to provide fundamental freedoms to the people of occupied Jammu and Kashmir.
She said people demand India to lift the draconian laws and ensure the just resolution of the outstanding dispute in accordance with the UN Security Council Resolutions.

When asked about the Afghan peace process, the spokesperson hoped the peace deal between the US and the Afghan Taliban will be signed sooner rather than later, and that it will take into account the interests of all the stakeholders.
The spokesperson expressed the confidence that the deal will lead to intra Afghan dialogue.
She said Pakistan seeks to see peace and stability return to Afghanistan more than any other country in the world.
She also referred to the recent visits of the UN Secretary General and the Turkish President.
Aisha Farooqui said these show a growing acknowledgment by the international community of Pakistan’s contributions towards global peace and security.

Responding to a question, the spokesperson said a special task force comprising of two officers of our mission in Beijing has been sent and deployed in Chinese city of Wuhan.
She said it would ensure the safety and wellbeing of Pakistani students.
She said the task force has already visited seven universities in Wuhan where they have individually met every Pakistani student besides interacting with the administration of those universities.

When asked about the arrests of Pakistani nationals in Saudi Arabia,  she strongly rejected the impression that it is a Pakistani specific drive.
The spokesperson reminded that Saudi Arabia carries out the exercise against illegal expatriates and workers every year before the holy month of Ramadan.
Farooqui said Saudi Authorities have also arrested nationals of several other countries as part of this drive.
She said our consulate in Jeddah remains in constant touch with the Saudi authorities on this matter.
Jeddah mission is taking all possible measures within the local rules and regulations to protect the interests of Pakistani community.
She said our fraternal ties with Saudi Arabia are of strategic importance and remain strong and dynamic.
She called for avoiding baseless reporting at all costs.
Pakistan reiterates demand for justice for Samjhauta Express blasts victims
US integrated air defense weapon system sale to India disturbs Pakistan
GTV