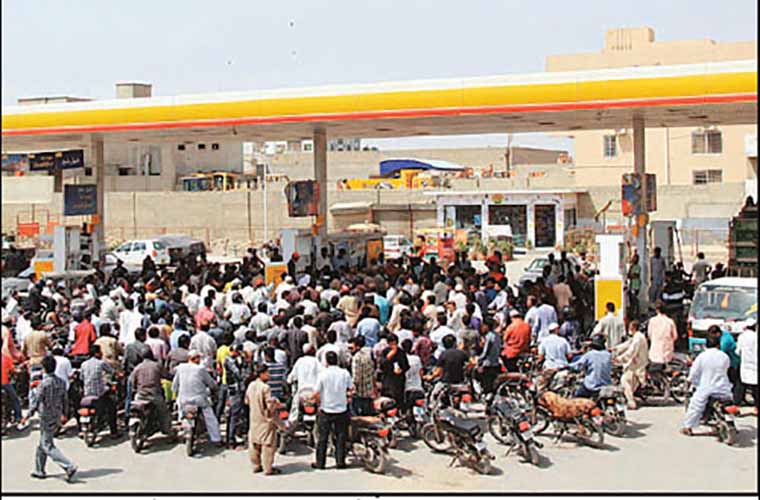 Rumour mongering on petrol shortage creates panic among Karachiites due to which they lined up at petrol pumps.
However, various fuel stations brushed aside that imprssion of shortage of  petrol supplies in Karachi.
Karachiites are getting the supplies from city’s various fuel stations this morning as usual.
Last night, people rushed to various petrol pumps in Karachi.

Rumours had it petroleum supplies would remain suspended amid closure of Kemari oil terminal on Wednesday night.
That forced people to bring their cars and motorcycles besides public transport vehicles to the petrol pumps.
The motorcyclists and cars got limited fuel up to 2-3 litres and 5-10 litres respectively because the some filling stations staff also had reservations.
An oil terminal of state-owned PSO in Zulfiqarabad reportedly remained functional for petrol supplies to the city.

Meanwhile, the Pakistan State Oil (PSO) in a statement claimed that they had closed down only one of their oil terminals across the city out of a total of 23.
It further said hat the closure should not affect fuel supply as 22 oil terminals are still functional.
Soybean offloading transferred to Port Qasim after deaths of 14
Karachiites already remained perturbed because 14 people died in Keamari.
Renowned scientist Dr Attaur Rehman remained 90 percent confirmed that Soybeans dust caused death of people in Keamari.
Moreover, it also made government to transfer Soybean offloading to Port Qasim.

Meanwhile, factories, companies, schools and colleges in Keamari have been closed owing to gas leakage.

Forensic Science Lab of Karachi University also stated that soybean dust could be linked with the latest deaths and breathing issue cases in Karachi.

Blood and urine samples of the victims were taken during the preparation of the report.

However, Dr Ataur Rehman said that such incidents have also occurred in other countries.

But government has not agreed with such viewpoint and continue to probe the matter.