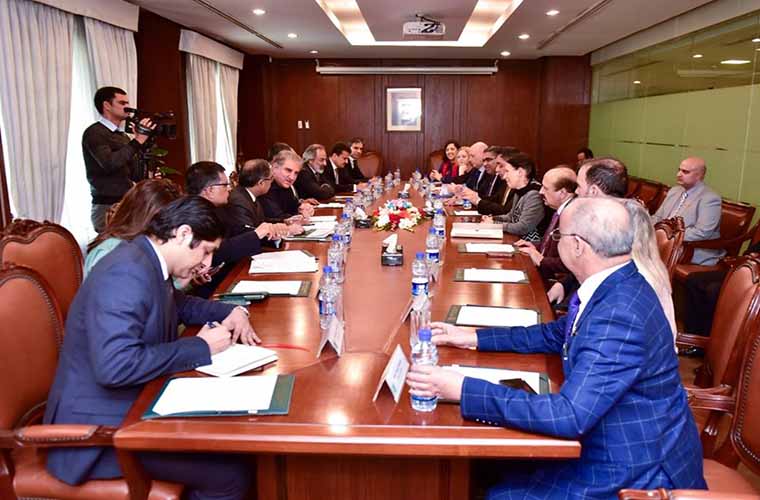 Foreign Minister thanked members of All Parties Parliamentary Group of British Parliament on Kashmir over their visit to Pakistan and AJK.

He said the visit reaffirms resolve of the group for resolution of Kashmir issue.

Qureshi said All Parties Kashmir Group is an important forum with which Kashmiris have attached high expectations.

Moreover, he said the group is playing an important role to highlight Kashmir issue at international level.

He sauggested international organizations, particularly the Kashmir Group, should prepare a review report on the latest situation in occupied Kashmir after India’s unilateral steps on August 5, 2019.

Meanwhile, President Nancy Lindberg and Vice President Andrew Welder of the United States Institute of Peace met him.
Foreign Minister Shah Mahmood Qureshi said that India’s illegal steps in Occupied Kashmir have heightened threats of confrontation in the region.
While talking to them, he also apprised the delegation of the steps which Pakistan was taking for peace and stability in the region.
The delegation informed the Foreign Minister that their Institute is working in collaboration with the civil society and local governments of Afghanistan in policy making and research.
Pakistanis and Kashmiris wait for support from UNSC permanent members specially UK and US on Kashmir issue.
GTV
GTV