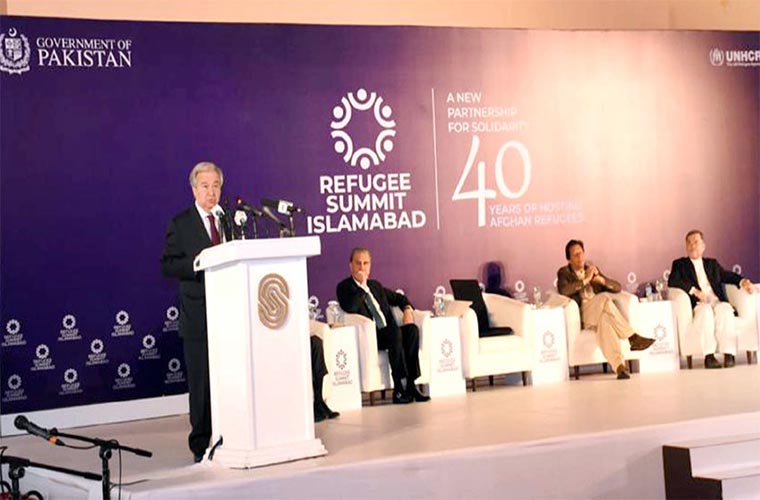 He said while addressing two-day Refugee Summit Islamabad on 40 years of hosting Afghan refugees in Pakistan, on Monday.
Antonio further said that solution lies in Afghanistan.
The Secretary General said we are here to serve Afghan people who deserve peace and stability and repatriation with safety and dignity.
He said people of Pakistan extended generosity to the Afghan refugees for forty years, and this story is very close to his heart.
He said Pakistan is still the second largest country in hosting refugees. He said despite many challenges Pakistan set a good example.
The UN Secretary General said we must recognize that the international support has been minimal as compared to national contribution.
He said time has come for international community to act and deliver with responsibility sharing. He said refugees is a big challenge, but this conference shows commitment to solve the issue.
Afghan refugees delegation meets UN secretary general in Islamabad
UN Secretary General Antonio Guterres arrives in Islamabad on 4 day Pakistan visit
Pakistan summons Indian diplomat to lodge protest over violations of ceasefire
A delegation of Afghan refugees called on UN Secretary-General Antonio Guterres in Islamabad.

While speaking on the occasion, the UN Chief said Pakistan remains one of the largest refugee-hosting nations in the world.

Among them 2.4 million registered refugees affected by the Afghan war.

The Secretary General expressed gratitude to people and government of Pakistan over their heartfelt hospitality.

The delegation also comprises of representatives from Afghanistan, Yemen and Tajikstan.