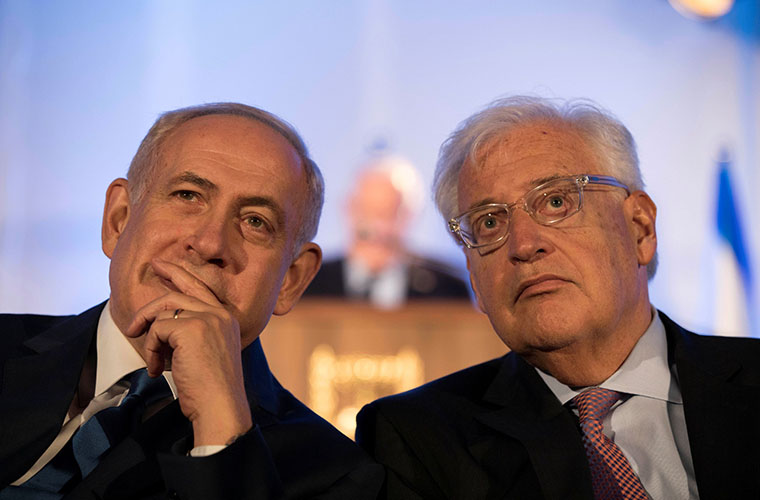 US ambassador to Israel  will lead joint committee to annex West Bank under President Donald Trump’s self-proclaimed “Deal of the Century.”
The US government has appointed members of that committee.
Washington DC has tasked it with mapping out areas of the occupied West Bank that Israel plans to annex.
A senior Trump administration official told the Israel Hayom daily that US ambassador to Israel David Friedman will lead the joint committee.
“Honored to serve on the Joint Committee,” tweeted Friedman Saturday. “Looking forward to getting started right away,” he said.
Other committee members will include Friedman’s senior adviser Aryeh Lightstone, and Scott Leith, a US National Security Council expert on Israel.
Israeli members will include tourism minister Yariv Levin and Israeli ambassador to the United States Ron Dermer.
The committee was announced by Trump last month during the unveiling of his scheme, which would see Israel control swathes of the West Bank in violation of the fundamental rights of the Palestinians.
Trump said the joint committee would be formed to “convert the conceptual map into a more detailed and calibrated rendering so that recognition can be immediately achieved.”
There is still no set timeline for when the committee will finish its work, but Israeli prime minister Benjamin Netanyahu has been pressured by right-wing lawmakers in recent weeks to announce the immediate annexation of all settlements before Israelis head to the polls.
Three weeks ago, both Netanyahu and Friedman said that Israel would be able to do so before the election, and Netanyahu planned to turn the issue into the cornerstone of his re-election campaign.
Trump’s son-in-law and adviser Jared Kushner, who is believed to be the architect of the so-called “Vision for Peace,” has said the US administration and Israel had decided to wait until a team was formed to examine the maps, and that he hoped Israel would wait until after the election.
GTV