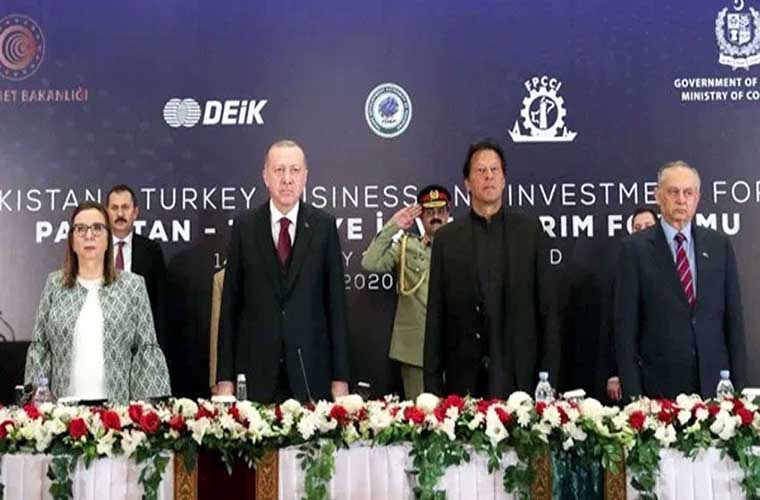 He said this while addressing the Pakistan-Turkey Business Forum in Islamabad on Friday.

He said that it would eventually take bilateral to five billion dollars later.

He said we want to take the commercial relations between the two brotherly countries to the same level as political ties.

Recep Tayyip Erdogan said the two countries can collaborate in a number of industries for their mutual benefit.

He said we should not allow protectionism or trade walls between us.

The Turkish President said his country is increasing investments in Pakistan.

He said Turkey is one of the top twenty economies of the world.

He said we have brought down our debt from 72 percent of GDP to 33 percent.

He pointed out that Pakistan has a huge untapped potential in tourism including in beach and historic places.

The Prime Minister said Pakistan can greatly benefit from the Turkish experience in the development of necessary infrastructure for the promotion of tourism.

Imran Khan said Pakistan also desires to learn from the experiences of Turkey in the fields of agriculture and mining.

Imran Khan said ours is the most business friendly government.

We have gained twenty places in the world ranking in ease of doing business. We have reduced regulations to facilitate the businessmen.

The Prime Minister expressed the confidence that the business communities of both the countries will come forward to benefit from the excellent political relationship that exist between the two countries.

Speaking on the occasion, Adviser on Commerce Abdul Razak Dawood invited the Turkish investors to initiate the joint projects in Pakistan.

He said both the countries have immense opportunities of cooperation.

Abdul Razak Dawood said both the countries have agreed to promote the strategic relations between them.

Pakistan to influence Taliban for direct talks with Turkey: PM