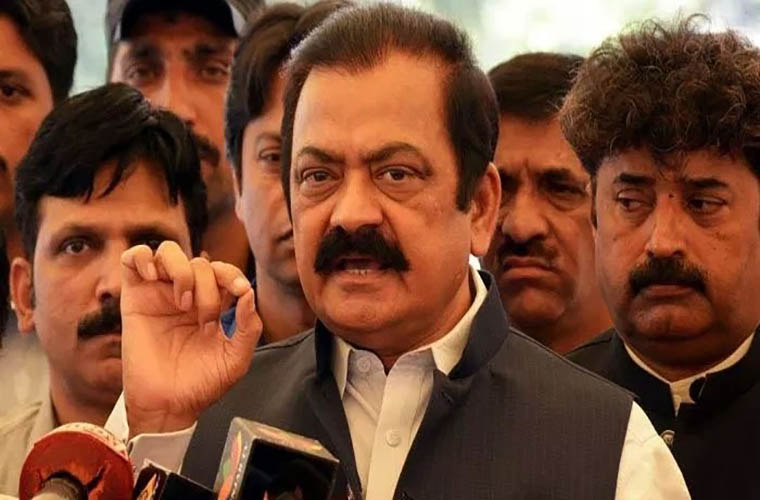 NAB summons Rana Sanaullah in assets beyond means probe on Feb19.
A joint investigation team of the National Accountability Bureau (NAB) is probing PMLN lawmaker Rana Sanaullah.
A private news channel reported it while quoting sources.
The sources told the media on Saturday that the NAB directed Rana Sanaullah to bring details of the assets of him and his family members.

NAB also asked him to further clarify the filing of the assets he submitted on Jan. 2 at the bureau’s headquarters in Lahore.
On Jan 3, a three-member investigation team questioned hm on charges that he owned assets more than his income.
Later, he was again summoned on Feb. 3 in the same case while being asked to submit documents of the lands and the farmhouse he owned.
Mr Sanaullah was also directed to fill a required form for the assessment of the assets in the same case to clearly point out whether his assets increased or decreased on an annual basis.

On the other hand, the PML-N stalwart has been demanding Federal Minister for Narcotics Control Shehryar Afridi to present the video in the court that the latter had claimed of on the floor of the National Assembly accusing the former in a narcotics case against him.
“If this is the case, then the video must be submitted to the court to back up the minister’s claim, he had added, while claiming that the Lahore High Court (LHC), in its decision on his post bail plea, stated that the possibility of “political vengeance” in the case could not be ruled out.
The PML-N leader had also denounced the law enforcement agencies for denying court entry to the media personnel, saying they had the right to witness the trial proceedings.
He had claimed that the government was being exposed during investigation into the drug case against him, and he had been falsely implicated in it at the behest of the government.
“Nawaz Sharif’s message for politicians and the parliament carries considerable prestige,” he had said, outlining that the message refers to adopting parliamentary methodology.
The Lahore High Court had on Dec 24 granted Mr Sanaullah a post-arrest bail in 15-kg heroin recovery case.
On Dec. 26, Mr Sanaullah was released from camp jail after the LHC granted him bail in the same case.
The PML-N MNA was released after furnishing two surety bonds worth Rs1 million each as directed by the LHC bench that approved his bail plea via a short order on Dec 24.
The LHC bench in its written verdict recording the reasons that compelled it to grant the PML-N leader bail after arrest said the trial court hearing the drug case against the accused had already granted bail to co-accused, which was not even challenged by the Anti-Narcotics Force (ANF) before the high court.
On Oct. 2, the PML-N leader had filed a bail petition in the LHC. The petition was, however, withdrawn the next day, to file the same at a later stage.
Earlier this month, Sanullah once again approached the LHC for post-arrest bail.
A special court for Control of Narcotics Substance (CNS) had on September 20 also dismissed a bail petition by Sanaullah while releasing five co-suspects.
On November 9, a CNS dismissed another bail petition of Sanaullah’s.
The court also issued notices to the investigation officer seeking a response on the application of Rana Sanaullah for provision of a video of the ministers.
ANF arrested him on July 1 after the discovery of a large stash of contraband in his vehicle from near the Sukheke area in Punjab. The next day, he was sent to jail on judicial remand by a local magistrate.
President of the PML-N Punjab chapter was travelling with his guards to a meeting from Faisalabad to Lahore.
However, first information report (FIR) was lodged under section 9 (C) of Control of Narcotic Substances Act 1997.
That carries death penalty or life imprisonment or a jail-term that may extend to 14 years along with a fine up to Rs1 million.
GTV