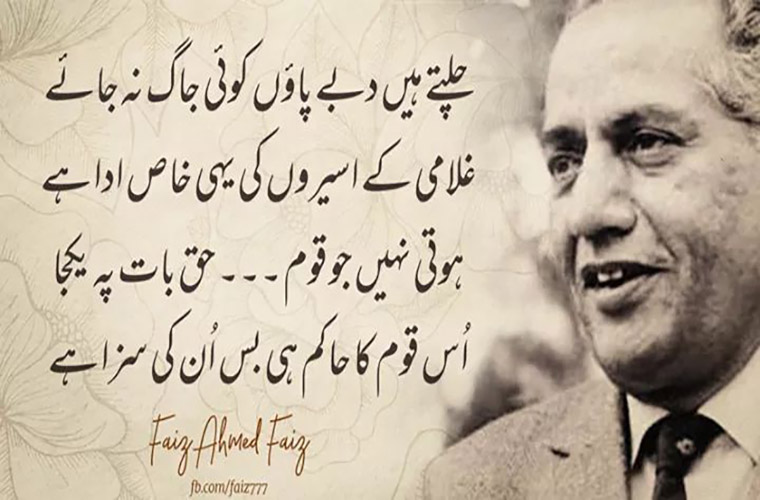 Faiz Ahmad Faiz was born on February 13, 1911 in Sialkot, the birthplace of Poet of the East, Allama Muhammad Iqbal.

After having completed his education, Faiz worked as a teacher, journalist and a politician as well.

He also served in British Army before independence of Pakistan and was promoted up to a rank of lieutenant-colonel.

However Faiz resigned in 1947 to join Pakistan Times, a local newspaper of progressive narrative.

Faiz was also among the first ever official Pakistani delegation to visit Bangladesh.

Faiz Ahmad Ahmad was awarded the Lenin Peace Prize in 1963, which was equivalent to the Nobel Prize in the then USSR, PTV news channel reported.

Faiz Ahmad Faiz wrote dozens of ghazals, dialogues and songs for films. Faiz breathed his last on 20th November 1984 at the age of 73 years. He buried in Lahore’s Gulberg graveyard.

Faiz married Alys Faiz a British national who had a tremendous influence on his life and poetry.

They had two daughters Saleema and Muneeza. Alys’ influence on Faiz’s life and poetry is reputed to have been enormous.

Moreover, Faiz spent much of the 1950s and 1960s promoting communism in Pakistan.

In the 1965 war between India and Pakistan, he worked in an honorary capacity in the Department of Information.

37 people die due to Coronavirus during last 24 hours