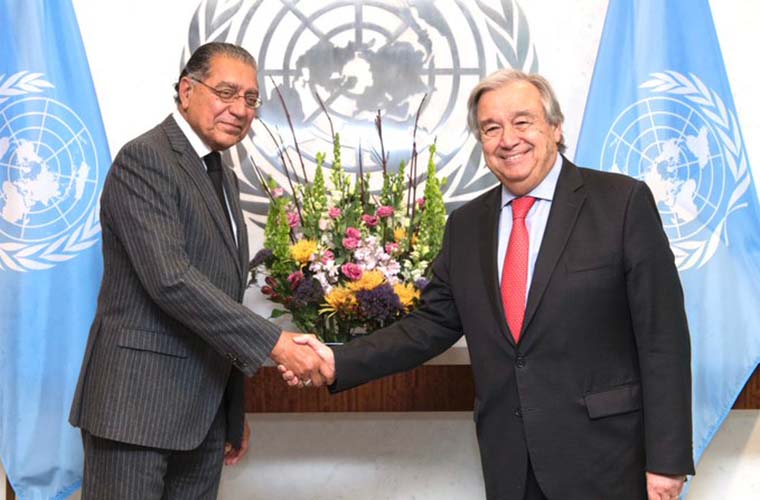 UN secretary general visit an endorsement of Pakistan’s role for peace and stability in the region, said Pakistan’s Permanent Representative to the United Nations in New York.

In a tweet, he noted that the visit endorses Pakistan’s critical role for peace and stability in the region.

Besides meetings with the Pakistani leadership, Antonio Guterres will participate in the international conference on 40 years of hosting Afghan refugees in Pakistan.

UNSG @antonioguterres visit not only endorses our historic hospitality but also acknowledges our long-standing cooperation with the @UN and our critical role for peace and stability in the region. pic.twitter.com/gDHM6Fop1S

Antonio Guterres will pay a four-day visit to Pakistan from Sunday to hold talks with Pakistani Leadership.

According to Foreign Office Spokesperson Aisha Farooqui, during the visit, he will address an International Conference on 40 Years of Hosting Afghan Refugees in Pakistan.

The Secretary-General will also call on the President and the Prime Minister.

Furthermore, he will hold a meeting with Foreign Minister Makhdoom Shah Mahmood Qureshi.

The Secretary-General’s other engagements include interactions with parliamentarians, media and the youth.

He will deliver special talks on themes of sustainable development, climate change and peacekeeping.

The Secretary-General will pay a visit to Lahore. He will also travel to the Gurdwara Kartarpur Saheb.

Pakistan at the United Nations
Pakistan joined the United Nations on September 30, 1947, just over a month after its independence.
Pakistan remains committed to a world in which upholding human dignity is the highest value and maintaining global peace a sacred duty.
The country envisages a world which is free of want, hunger and deprivation.
Besides, Pakistan believes in a world where justice and fair play govern the affairs of human beings.
Moreover, Pakistan believes in world where inequality, oppression and war are abhorred.
UN Medal awarded to Pakistan female army team for Congo mission