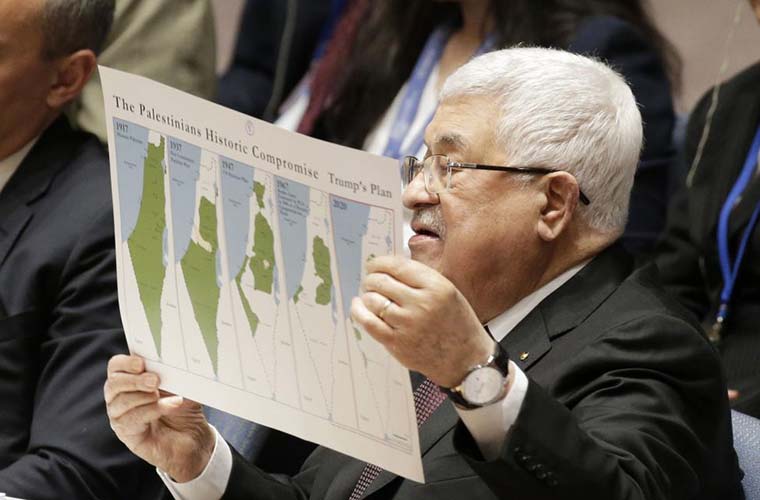 He termed the plan a gift to Israel and unacceptable to Palestinians.

He said the plan is in breach of United Nations resolutions and Palestinian sovereignty.
“I would like to say to Mr. Donald Trump that his plan cannot achieve peace and security as it cancels international legitimacy,” Abbas told the UN Security Council in a speech.
“It cancels all the rights of the Palestinians. This does not meet the aspirations of a two-state solution,” he added.
Stressing that the plan would legitimize Israel’s illegal settlements and the annexation of occupied Palestinian land, Abbas said, “If you impose peace, it will not last, it cannot last. What gives you the right to annex these lands?”

However UPI reported that Mahmoud Abbas said that although he rejects the US’ proposed Mideast peace plan, he’s willing to negotiate with Israel under certain circumstances.

Reuters reported that he waved a copy of a map that the U.S. plan envisions for a two-state solution for Israel and Palestine.

He said the state carved out for Palestinians looks like a fragmented “Swiss cheese.”

His appearance came amid circulation of a draft U.N. Security Council resolution that would condemn an Israeli plan to annex its settlements in the West Bank.

Israeli plan would amount to a rebuke of the Trump plan.

The draft text, circulated to council members by Tunisia and Indonesia, would face a certain U.S. veto.

But it nonetheless reflected some members’ dim view of the peace plan that Trump rolled out two weeks ago with great fanfare.