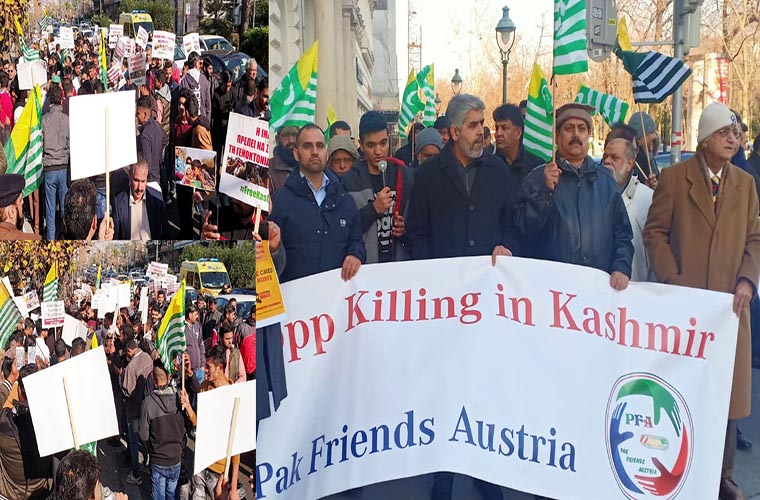 Pakistani and Kashmiri diaspora continue to hold protest rallies in important cities of the world.

The protest aims at highlighting the plight of oppressed people of occupied Kashmir.

They expressed solidarity with oppressed Kashmiris of IOJK.

Interestingly, they don’t restrict Kashmir Solidarity Day to February 05 only.

The participants assembled near the Austrian parliament and marched towards Indian Embassy.

They chanted slogans against Indian atrocities in occupied Kashmir.

Notables from the community made speeches on the occasion highlighting Indian atrocities in occupied Kashmir and expressing solidarity with the oppressed people.

A big rally was also taken out in Athens right in front of the Indian embassy. The participants carried banners condemning Indian atrocities in occupied Kashmir.

Under that India also extended the detention of former puppet chief ministers Omar Abdullah and Mehbooba Mufti.
That law allows detention without charges for up to two years.
However, India held them earlier under a law that allowed a maximum of six months, and their detention was about to expire.
Both the leaders, are already under detention since 5th August 2019, the day when India revoked the special status of occupied Kashmir.
National Conference, General Secretary, Ali Mohammed Sagar, was also served a PSA notice by the authorities.

This extended detention of Mehbooba Mufti and Omar Abdullah angered Kashmiris and many Indians alike.

According to Radio Pakistan, India has extended the detention of four political leaders in occupied Kashmir.