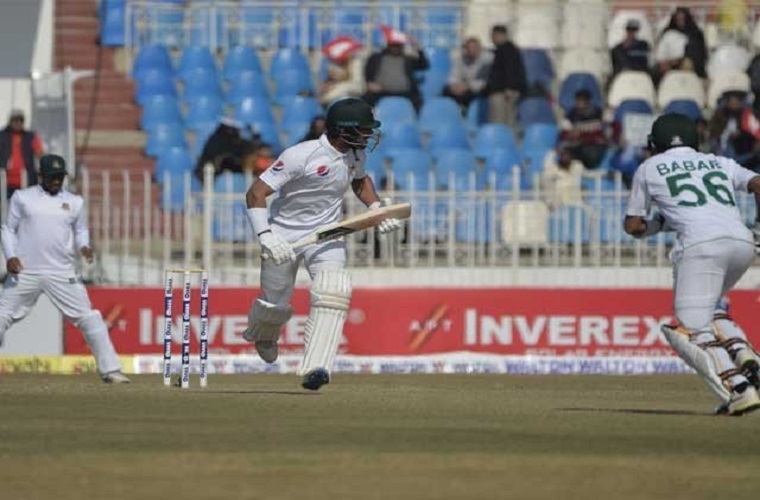 Pakistan reaches 95-2 at lunch on the second day of the first Test in reply to Bangladesh´s first innings total of 233 at Rawalpindi stadium on Saturday.

Left-handed opener Shan Masood was unbeaten on 59 and with him Babar Azam was yet to open his account after Pakistan lost record-seeking Abid Ali for duck in the second over.

Pakistan need another 138 runs to overhaul Bangladesh´s total and press home for victory.

When Pakistan started their innings in the morning all focus was on Abid who had scored two hundreds in his first two Tests against Sri Lanka in December last year.

Another hundred would have equalled Indian player Mohammad Azharuddin´s unique record of three successive centuries in his first three Tests, but Abid fell way short when he was dismissed without scoring.

He edged a short and wide delivery from Bangladeshi paceman Abu Jayed into the hands of wicketkeeper Liton Das and trudged off to the pavilion heartbroken.

Skipper Azhar Ali added 91 runs for the second wicket with Masood and looked set for a big score until he miscued a drive off Jayed and was caught by Najmul Hossain Shanto in the slip.

Masood looked in prime touch bringing up his seventh Test half century and has so far struck nine boundaries.