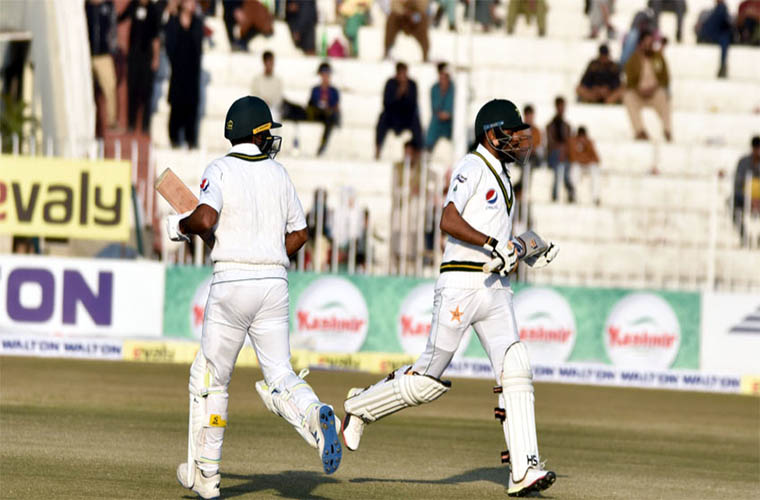 Babar Azam and Shan Masood scored scintillating centuries.
Pakistan’s first innings start was not impressive as Abid Ali, who had hammered two back-to-back tons against Sri Lanka in December went back on a duck after playing a poor short in the second over when Pakistan’s scored was just two.
Skipper Azhar Ali, who joined Shan Masood lost his wicket at 34, just three overs before the lunch break.
He got an edge off Abu Jayed that flew to slip where Najmul Hossain Shanto took a safe catch.
The pair provided Pakistan a 91-run second wicket stand. After Azhar’s departure right-hand stylish batsman Babar Azam came to the crease, who miscued a flight by Taijul Islam when he was at three.
Bangladesh would have taken the most important wicket had Ebadat Hossain shown some alertness at mid-off to take Babar’s catch. Babar and Shan scored 112 runs in between them when the later lost his wicket after scoring a scintillating free-flowing 100 off 160 balls with the help of 11 boundaries. He was clean bowled by Taijul.

Later, Babar and Asad Shafiq took toothless Bangladesh attack for a ride in the third session.
The fading light then forced an end to the day’s proceedings after 87.5 overs. At stumps Pakistan were 342/3 with both Babar and Shafiq unbeaten at 143 and 60, respectively. Together they put on 137 at nearly four an over.
Right-arm fast-medium Abu Jayed was the most successful bowler for Bangladesh as he picked up two wickets for 66 runs in his 20 overs. While slow left-arm off-spinner Taijul Islam captured one wicket for 111 runs in his 34 overs.
Left-hand opener Shan Masood in the post day press conference heaped praises at Pakistan’s pacers stating that the way they bowled against Bangladesh was remarkable.
“At a wicket where we scored around 350 runs today our bowlers restricted Bangladesh batsmen on 233. So I think we should give all credit to our bowlers, especially the fast bowlers.
“It was not easy to bowl here. But due to their effort we are in a good position and on way to post a big total on the board. We tried to stay on the wicket and waited for the ball to get old as it became easier for us to score runs.”
He expressed the hope that rest of the batsmen would capitalize the situation and contribute in scoring a big total.
Meanwhile Bangladesh bowling coach said that Bangladesh bowlers needed to be a bit more consistent. “We got early wickets but could not build up pressure and that is why we are behind in the game,” he said.
He said there were still three more days in the match and hopefully the players would learn from mistakes and make a comeback. He said Babar’s catch was dropped but if it were taken it would have made a difference.
GTV