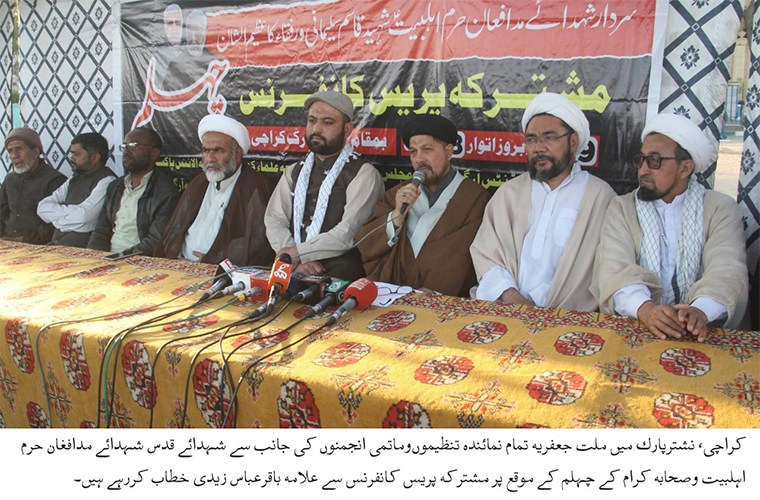 All set to hold Chehlum

Now, they all set to hold the event in a befitting manner.
They said that Lt-Gen. Qassem Soleimani Commander Abu Mahdi Mohandis had led counterterrorism war for the protection of sacred shrines of Ahl-e-Bait (AS) and companions of Prophet Hazrat Mohammad (PBUH).
They praised them as great martyrs. They said people would pay tribute at mammoth public meeting.
They also slammed US hegemonic designs in the region which they said also pose existential threat to Pakistan.
Said leaders condemned United States illegal military intervention and airstrikes in sovereign countries. They also condemned U.S. for assassinating Lt.-Gen. Qassem Soleimani in illegal airstrikes in Baghdad.
Furthermore, they said that their public meeting would mark unity of Muslims and freedom-loving people.
They said that the US hegemonic design suffered defeat in Middle Eastern/South West Asia due to axis of resistance.
They said that Iran retaliatory missile attack and Afghan resistance groups have shattered the US superpower image.

Shia parties’ leader said that US establishment consider resistance bloc, China and Russia a challenge to its hegemonic design. Hence, US aims to disturb them and the entire region.
They also held US responsible for economic and political crisis in Pakistan. However, they urged Foreign Minister Shah Mehmood Qureshi to refrain from serving some Sheikhdoms and US like slave.
They called for independent foreign policy of Pakistan instead of toeing US and Arab sheikhs/royals’ line.
Moreover, they vowed to strengthen intra-Islamic unity. They said the chehlum of Qassem Soleimani and Abu Mahdi Mohandis would demonstrate unity of Muslims.