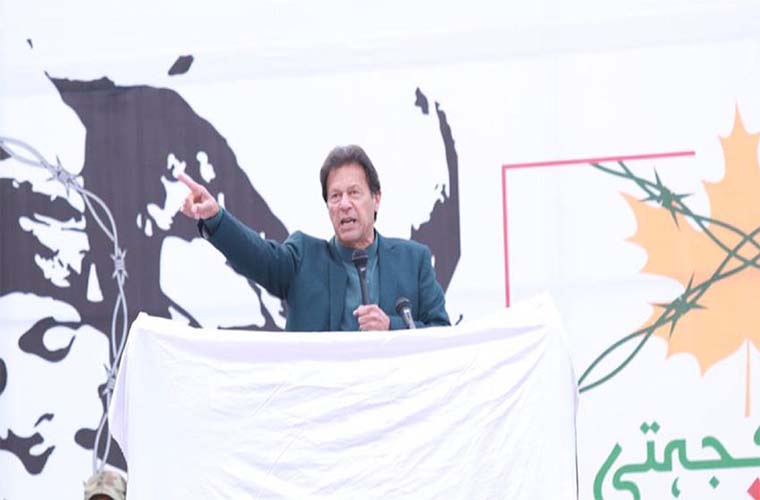 Prime Minister warns India its misadventure will end up in its own defeat.

He said the day curfew will be lifted in Occupied Kashmir, a sea of people will come out of their houses to demand freedom from Indian rule.

Imran Khan said the world had largely forgotten the issue of Kashmir before the Indian action of 5th August.

But in six months’ time, the issue of Kashmir has been highlighted in whole world.

He said Indian Prime Minister Narendra Modi won the elections last year on the basis of his hate campaign.

He further said due to election compulsions, India raided Balakot to martyr a few trees.

Khan said Pakistan shot down Indian jets last year and even released the captured Indian pilot as a goodwill gesture because we believe in resolving the issues peacefully.

He said Narendra Modi tried to annex Occupied Kashmir by unilaterally revoking its independent status. However, the issue became internationalized in such a manner which was not even anticipated by Modi.

He said for the first time, Kashmir issue has been highlighted at UN forum thrice, after 1965.

He said US Congressmen, British Parliament and EU Parliament raised the issue of Kashmir.

Imran Khan said during his meetings with world leaders, including those of Germany, Canada, US, UK and other major powers, he apprised them of the critical human rights situation in Occupied Kashmir.

He said today the world fully comprehends the situation Kashmiris are living in.

He said the plan of RSS to massacre Kashmiris could not be implemented due to world pressure.

Warning India, he said any misadventure launched by New Delhi will result in its own defeat. He said more than 200 million people of Pakistan and its battle hardened army will teach India a hard lesson. He said this will be a grave and final mistake of Narendra Modi.

Earlier, Foreign Minister Shah Mahmood Qureshi addressing the rally said whole Pakistan nation, political parties and stakeholders stand with their Kashmiri brethren with one voice. He said no Pakistani can betray Kashmiris and Kashmir cause.

He said the issue of Kashmir again came on the agenda of UN after a lapse of fifty years due to active efforts of Pakistan.

The Minister said hoisting of Kashmiri and Pakistani flags together is a message for Indian Prime Minister Narendra Modi that any attempt to erase the identity of independent status of Occupied Kashmir in violation of UN Security Council resolutions will never succeed.

Shah Mahmood Qureshi said any line on map cannot separate Kashmiris from each other. He said time and history will tell that blood of Kashmiris has not gone in vain.

Eulogizing the bravery and fortitude of Kashmiris in their struggle, he said this brave nation will never be cowed down by suppression of Indian government.

In his address, Minister for Kashmir Affairs Ali Amin Gandapur said Pakistani people fully stand with their Kashmiri brothers and sisters in their just struggle to freedom and will always remain.

He said Prime Minister Imran Khan by playing the role of Ambassador for Kashmir cause in true sense has highlighted this lingering issue in such a way that now it is reverberating around the world.

In a message to Indian Prime Minister Modi, Ali Amin Gandapur said the victory stands with passion and no one can suppress the Kashmiris’ indigenous struggle to get their inalienable right to freedom.

Pakistan Army will not allow enemies to destabilise Pakistan: COAS