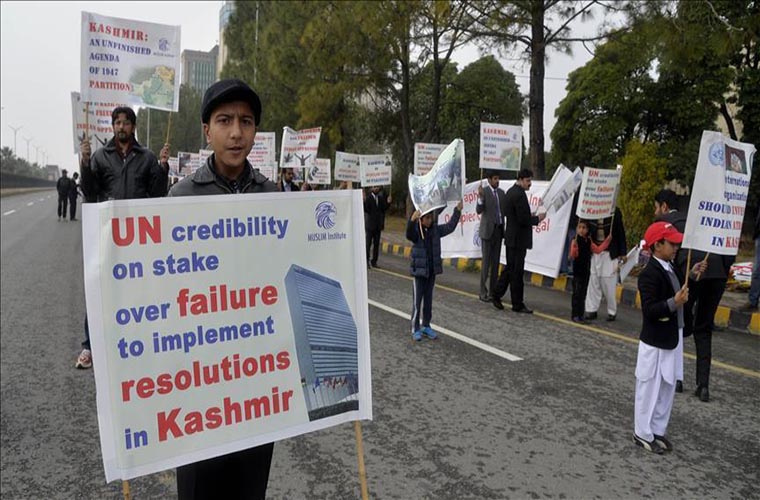 Pakistanis observe Kashmir Solidarity Day across the world to express wholehearted support to the just struggle of Kashmiri people for their inalienable right to self-determination under United Nations resolutions.

In Pakistan and in many countries around the world Pakistanis organise special programmes.

The 2020 Kashmir Solidarity Day has come after India revoked the special status of occupied Kashmir in August 2019.

Unfortunately, India did so in breach of all international laws, and since then the entire population of the held territory has been under lockdown.

One minute silence was observed at 10.00 am to pay homage to the martyrs of the liberation struggle of occupied Kashmir.

In a message on the occasion of Kashmir Solidarity Day, the Foreign Minister Shah Mahmood Qureshi has said the international community must do more to support the people of Occupied Jammu and Kashmir in this time of trial and tribulation.

He said each additional second on the lockdown clock is a burden on the world’s collective conscience.

The Foreign Minister said the international community must act in support of the fundamental freedoms and basic human rights of Kashmiris and urge India to allow the UN Fact Finding Mission to occupied Kashmir to ascertain the reports of grave human rights violations there.

In her tweet, Foreign Office Spokesperson Aisha Farooqui said the entire Pakistani nation stands as one in solidarity with their Kashmiri brothers and sisters.

The Spokesperson said Pakistan will continue to raise its voice for their inalienable right to self-determination.

In a tweet, he said occupied Kashmir has been in lockdown for over 180 days.

The PPP Chairman said we stand in solidarity with our Kashmiri brothers and sisters. He assured that his party will always fight for them.

Kashmir Council Europe (KC-EU) organized an event of candle light vigil in Brussels, the capital of Belgium in order to express solidarity with oppressed people of Indian Occupied Kashmir (IOK).

The program was arranged in connection with Kashmir Solidarity Day at Place du Luxembourg in front of EU parliament in Brussels, the EU headquarters.

A large number of people from all walks of life and representatives of different NGOs including members of Human Rights Organizations attended the event.

Meanwhile, Pakistani communities also held ceremonies in connection with Kashmir Solidarity Day in various countries, including Britain, Malaysia, Algeria and Tajikistan, to express support to Kashmiri brethren in their just right to self-determination.

Addressing a seminar in connection with Kashmir Solidarity Day at the British Parliament, Pakistan’s High Commissioner to the United Kingdom Mohammad Nafees Zakaria underlined the need to resolve the Kashmir dispute in lines with UN Security Council resolutions and aspirations of Kashmiris.