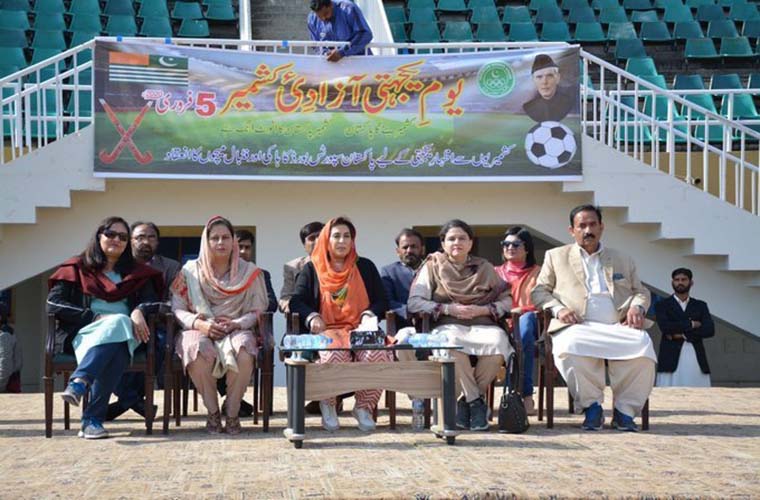 The minister who was chief guest at the occasion, condemned the illegal action of India in the Indian Occupied Kashmir including detention of youth, political leaders and communication blockade.

She also condemned the horrifying violence against women and deplored the continuing restriction on the freedom of expression in the occupied valley, describing it as grass violation of fundamental rights.

Dr. Fehmida Mirza called upon the UN Security Council to enforce a peaceful settlement of the Jammu and Kashmir dispute in accordance with its resolution.

PSB Director General Amna Imran Khan also thanked the minister for sparing her valuable time for the noble cause of Kashmiris. She also appreciated the sportsmen spirit of the players and participants who made human hand chain to express solidarity with the Kashmiri brethren.

The hockey match was played at fast pace, and Kashmir Eleven beat PSB Eleven by 2-1. Miss Haya and Sidra scored one goal each for Kashmir Eleven while Miss Beenish scored the lone goal for PSB Eleven. She also declared best player of match for her good performance. The match was supervised by Wajid and Azeem.

In the Football match, PSB XI outclassed Kashmir XI by 2-1.

The goals were scored by Ali Ahmed and Hussan-e-Alam for PSB XI. Afaq scored one goal for Kashmir XI. Tauqeer was the Referee and Ali Nawaz and Shamoon were the Assistant Referees.

The minister also distributed certificates and trophies to the participants.