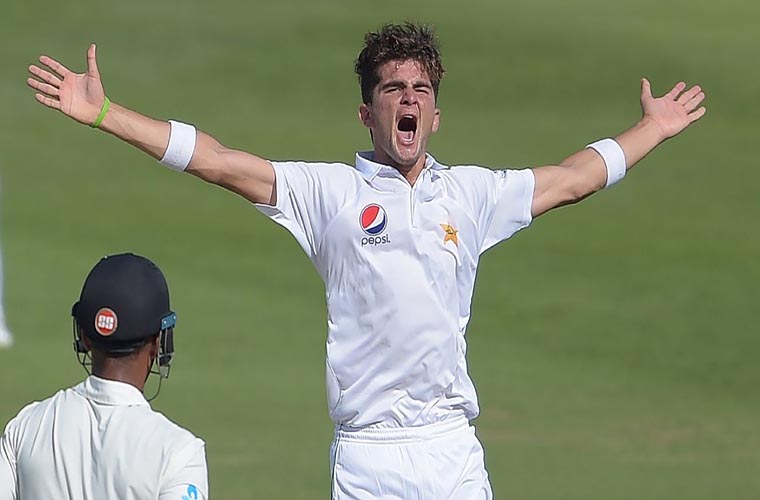 “When I took the first wicket I wasn’t sure whether the batsman had nicked the ball,” Shaheen said on Monday .

“It was Rizzy [Mohammad Rizwan] who told me that the batsman had edged the ball and he was very certain about it.

“We had a young bowling unit and there was a lot of responsibility on me as we had been dismissed for a small total.”

After rain played spoilsport in Rawalpindi, the focus had shifted to Karachi.

Pakistan and Sri Lanka were playing in the second ICC World Test Championship fixture between them.

Pakistani players were playing first-ever Test series in their homeland after more than 10 years.

Eager to make the most of the occasion, they tried their best.

They, however, were off to a shaky start as Azhar Ali’s men were bowled out for 191 in 59.3 overs on day one after opting to bat.

With a small total on board and the sun about to set on the metropolitan city, Pakistan needed to strike with the ball to push the visitors on the back foot.

At that moment, Shaheen Shah Afridi raised his hand.

The 19-year-old induced an edge from Oshada Fernando, inviting him to drive on a fuller delivery, in the seventh over of the first Sri Lankan innings.

The day ended with honours even as Sri Lanka were 64 for three – thanks to Mohammad Abbas, who accounted for the wickets of Dimuth Karunaratne and Kusal Mendis.

On day two, Shaheen returned with more firepower and got the prized scalps of Angelo Matthews and Dhananjaya De Silva, who had struck an unbeaten 102 in the first Test.

“I was working on Mathews and bowling him at the same channel.

He was trying to bat deep and waiting for the ball to get older.

“The plan for De Silva was a simple one and it was that we have to get him out as soon as possible as he had scored runs against us previously.”

With Sri Lanka reduced to 271 for eight after Dinesh Chandimal, the only batsman to put up a resistance with 74, back in the pavilion, Shaheen dismissed Dilruwan Perera, who made 48, and Lahiru Kumara (0), the last two tourists’ wickets, in a span of three balls.

He recorded his first-ever five-wicket haul in Test cricket with five for 77 and that it came in front of his countrymen, cheering in stands, made it more special for the youngster.

“There was an instance when we thought we are playing a T20 as the crowd had turned out in large numbers to support us. We were all very excited as Test cricket was back in Pakistan after a gap of 10 years.

In the next innings, it was Naseem Shah, the 16-year-old pacer, who dismantled the Sri Lankan batting line-up. Playing only his second Test, Naseem took five for 31 to also record his maiden five-wicket haul in Test cricket.

“During the second Sri Lankan innings, I had told Naseem that it was his day and he will take wickets. He had that hunger and he wanted to compete with me.

“It is a healthy rivalry to have. It is something that Wasim Akram and Waqar Younis also had. This not only brings out the best performances from us but also helps the team.”

The first Test between Pakistan and Bangladesh, an ICC World Test Championship fixture, will begin on Friday at Rawalpindi Cricket Stadium.