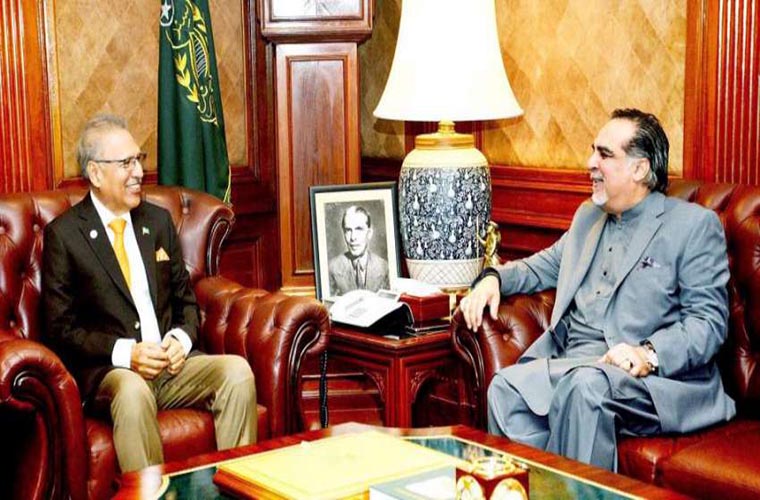 During meeting, President Dr. Arif Alvi has stressed the need for participation of all political stakeholders to resolve problems of masses.

While talking to Governor Sindh Imran Ismael. he further that federal government is taking all the stakeholders on board.

The President said that the federal government is taking practical steps to resolve problems of the people.

He noted the projects whcih government launched for the welfare of people.

He said these projects remain manifestation of this fact.

Sindh governor on this occasion said that the development and prosperity of the people of the province are among the priorities of Prime Minister.

Italian Ambassador to Pakistan Stefano Pontecorvo along with Italy’s Consul General in Karachi Ms.Anna Ruffino called on Sindh Governor Imran Ismail at the Governor’s House here on Saturday.
They discussed bilateral trade and diplomatic relations, further enhancing bilateral trade, tourism promotion and other important issues in the meeting, said a statement.
Talking to the Italian Ambassador, the Sindh Governor said that Pakistan possessed beautiful and attractive destinations for the foreign and local tourists. Special steps are being taken to introduce these tourists destinations to the world, he added.
Imran Ismail said that Pakistan also has a prominent place in the mountain range for maintaining. Many high mountains including K-2 are situated in Pakistan, Governor Sindh added.
He said that Italian investors can invest in different sectors in Pakistan’s economy. In this regard, the Government will also provide all possible support and assistance to the investors, Governor Sindh said.
Talking to Sindh Governor Imran Ismail, the Italian Ambassador said that Pak-Italy bilateral relations become more stable with the passage of time.