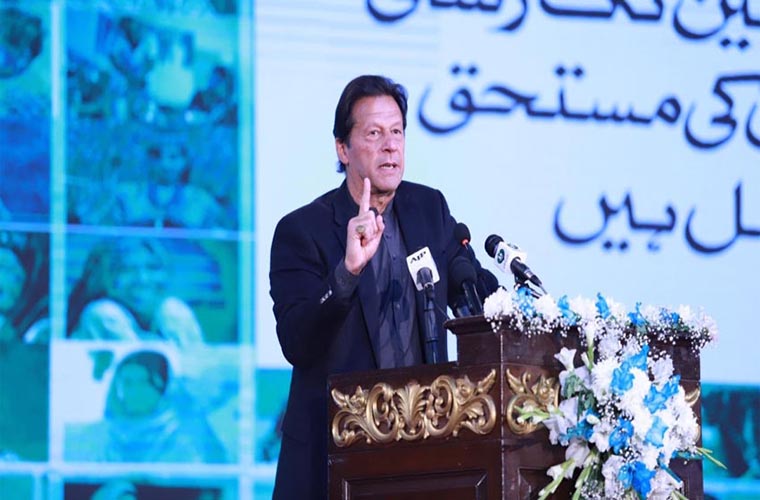 PM launches Ehsaas Kafalat Programme to aid 7m deserving women.
Prime Minister Imran Khan announced formal launch, while addressing the ceremony in Islamabad on Friday.
Ehsaas Kafaalat Program aims at financially empowering around 7 million most deserving women across the country in three phases.
Prime Minister said that government is taking steps to make Pakistan a welfare state on the pattern of state of Madina.
He said the social welfare programs of the incumbent government transform Pakistan into a country where social equality prevails.
PM Khan said no society can develop where elite prospers at the expense of a sea of poor people.
He said PTI government has so far given health cards to six million families who can now avail medical treatment of upto 720,000 rupees.

He said loans being given under Ehsaas program will promote entrepreneurship and small and medium enterprises of the country.
Imran said around two hundred billion rupees have been earmarked for Ehsaas program to help uplift the weaker segments of society.
He said under Kafaalat program opening bank accounts of women will help stop theft of their money and also enable them to purchase essential items from Utility Stores Corporation outlets.
PM Khan also appreciated giving smart phones to program recipients that will open a whole new world for them and their families.
He said new programs of Ehsaas will be coming soon, under which other social welfare measures will be given to poor people.
PM said stenting and malnutrition are two major issues facing the poor people.
He appreciated the Special Assistant Dr. Sania Nishtar on working hard and developing proper system to distribute money among the most deserving people of the country.
The Prime Minister also distributed Kafaalat cards among the deserving women.
Earlier, Special Assistant on Social Protection and Poverty Alleviation Dr. Sania Nishtar spoke.
She said that under the program deserving women will be given cash stipends of two thousand rupees per month.
She said identifying the deserving persons was a big task as the data of BISP was ten years old.
Dr Sania said the government used NADRA records and surveys to identify the persons who really deserve, so that unscrupulous elements do not take advantage of the scheme.
She said process of desk registration of deserving persons has been started at the Tehsil level.
She said agreements have now been made with two banks to open biometric ATMs to facilitate the receiving of money under Ehsaas Kafaalat program.
Dr Sania said every recipient woman will have a saving bank account. She said smart phones will be provided to the recipients in order to facilitate them on financial transactions and to gain access to other useful projects under Ehsaas initiatives.
She said 7 million households are being brought into the fold of Kafaalat, which also includes 4 million households of Benazir Income Support Program.
Kafaalat programme covers 50 districts across the country while schedule of remaining districts will be issued soon.