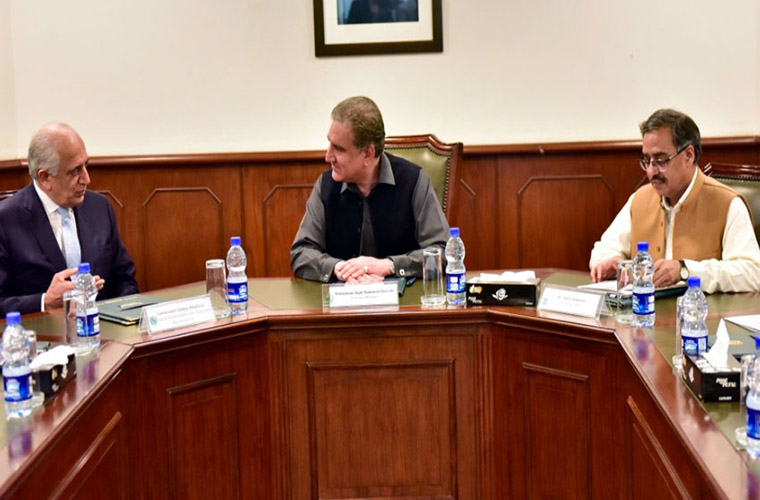 While talking to him in Islamabad, Foreign Minister Shah Mahmood Qureshi said Pakistan will continue supporting peace efforts in Afghanistan as a joint responsibility.
However, he said that a peace agreement between the United States and the Taliban would pave the way for intra-Afghan dialogue.
He further said it would prove useful for peace and stability not only in Afghanistan but the entire region.
The two sides agreed to continue consultation to make joint efforts for Afghan peace process.
Ambassador Zalmay Khalilzad informed the Foreign Minister about details of current situation of the ongoing talks with the Taliban.
Meanwhile, he also appreciated Pakistan’s reconciliatory role.

Pakistan underlined importance of early US Taliban peace deal and intra-Afghan talks.  Foreign Minister Shah Mehmood Qureshi share it with the US Special Representative for Afghanistan Reconciliation, Ambassador Zalmay Khalilzad.
Khalilzad called on Foreign Minister Qureshi in Islamabad. The latter also underlined the need to be mindful of the role and activities of spoilers who did not wish peace to return in the region.
According to ministry of foreign affairs, Khalilzad apprised the Foreign Minister of the latest situation in the Afghan peace process.
Furthermore, Qureshi reiterated Pakistan’s steadfast support as well as facilitating role in the Afghan peace and reconciliation process.
Pakistan sees President Trump’s decision to resume dialogue with the Taliban a positive development. Because it would help establish peace and stability in Afghanistan and the region.
US halts talks with Taliban after attack near US airbase in Afghanistan
Taliban agree to a temporary ceasefire in Afghanistan