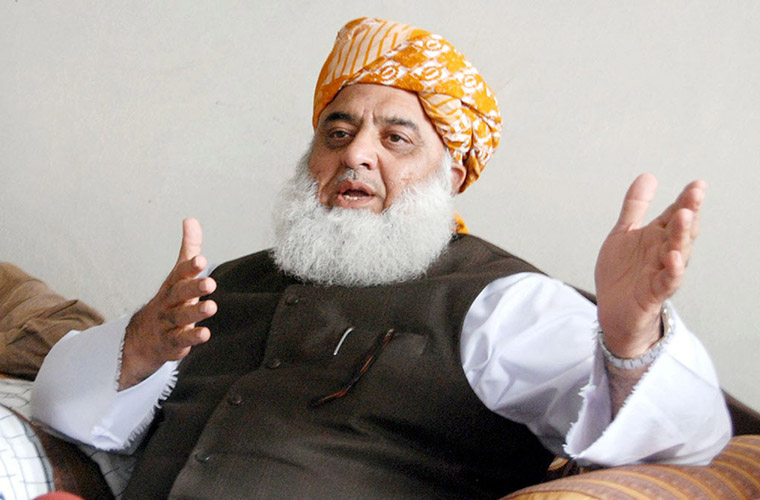 JUIF leader Fazalur Rehman gets 5 parties support for anti govt campaign which he would run next month.

However, this time his JUIF has support from 5 other parties in campaign against the incumbent government of Pakistan Tehreek-e-Insaf (PTI) from February 5.
A private news channel has reported that JUI-F has finalised the schedule of the campaign after consultation with said parties’ leaders.  It quoted JUI-F sources as saying so.
Besides him, Mahmood Achakzai, Aftab Sherpao and leaders of other parties will also address the protest campaign.
The sources said of joint protest gatherings conventions in Lahore on February 9.
Then they will hold protest in Islamabad on February 15.
Moreover, the will organize joint protest in Karachi on February 23 and in Peshawar on March 1.

With the verbal support from other opposition parties, JUIF had acted upon its Plan A and Plan B. Under those plans, they staged sit-in across the country, specially in Islamabad.

However, now their plan c include dismissal of the PTI-led government.

Durrani said that their plans A and B had weakened PTI’s provincial governments in Punjab and KP, let alone federal government.

By skipping the KL Summit, government has not only angered the friendly countries but also pushed Pakistan to global diplomatic isolation, he said.

The Rehbar Committee’s convenor noted that KL Summit was conceived after consultation with the Pakistan government and Kashmir issue included in KL summit agenda.