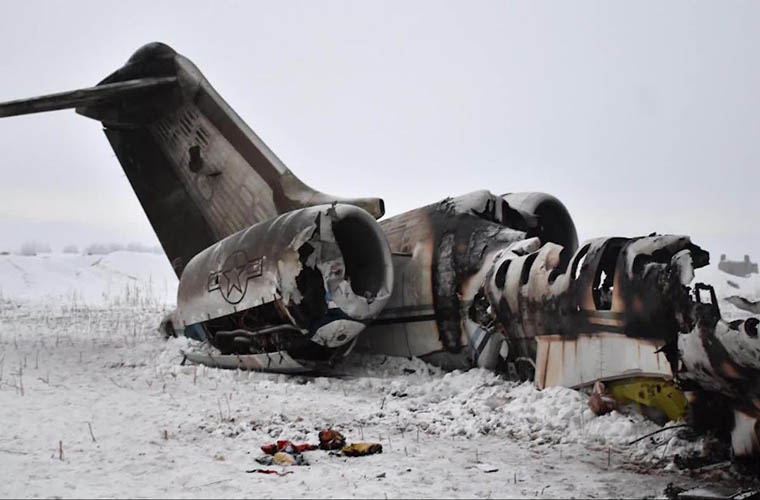 Pentagon confirm recovery of 2 bodies after US plane crash in Afghanistan.

Two bodies have been recovered from the US military aircraft that crashed in Afghanistan’s Ghazni province Monday.
A defense official has confirmed it to the CNN.

The official further said hat sensitive equipment was also disabled by military personnel that arrived at the site.
The latest reports also indicate there was a distress call from the crew indicating some type of trouble with the aircraft, the official added.
Later on Tuesday a statement from the Pentagon confirmed the remains of two personnel had been recovered.
“The force also recovered what is assessed to be the aircraft flight data recorder. The cause of the crash remains under investigation, however there are no indications the crash was caused by enemy fire.
The remains were found near the crash site, treated with dignity and respect by the local Afghan community, in accordance with their culture. U.S. forces destroyed the remnants of the aircraft.” the statement added.
The Pentagon said the names of the dead service members would be withheld until next of kin have been notified.
The news comes amid an ongoing investigation to determine what caused the crash. A spokesperson for US Forces in Afghanistan said Monday that there is “no indication” the plane was downed by enemy fire.
“A U.S. Bombardier E-11A crashed today in Ghazni province, Afghanistan. While the cause of crash is under investigation, there are no indications the crash was caused by enemy fire. We will provide additional information as it becomes available,” Col. Sonny Leggett said in a tweet.
“Taliban claims that additional aircraft have crashed are false,” he added.
Multiple reports had emerged of a plane crash in the region, which is largely controlled by the Taliban and lies to the southwest of the Afghan capital of Kabul.
Secretary of Defense Mark Esper said Monday he was “aware of the situation” but would not elaborate with any more details, saying “he has nothing further to report at this time.” Esper assured that the Pentagon will update the media when the “matter develops.”
The E-11A is used to link troops in the field to headquarters and has been previously described by Air Force pilots as “WiFi in the sky.”
It operates as part of the Air Force’s Battlefield Airborne Communications Node (BACN), which was developed in response to communication problems during Operation Red Wings, a US military mission in Kunar province, Afghanistan, in 2005, according to a press release published by the service in 2018.
The 2005 operation involved a four-man Navy SEAL reconnaissance patrol that was compromised. Three of the SEALs were killed and a MH-47 Chinook helicopter carrying a rescue force to extract the patrol was shot down, killing the eight SEALs and the eight Army Special Operations crew on board.
“Due to Afghanistan’s mountainous terrain and lack of existing communication infrastructure, serious communication challenges prevented the four-man SEAL patrol from effectively establishing contact with their combat operations center, leaving them vulnerable to the attacks that claimed the lives of 19 special operations forces service members,” it said.
Between 12,000 and 13,000 US troops are currently serving in Afghanistan as part of a US-led NATO mission to train, assist and advise Afghan forces.
There have been more than 2,400 deaths of US service members since the start of America’s longest war in 2001. Last year was the deadliest in five years for the US in Afghanistan, with 23 service members killed during operations in the country in 2019.