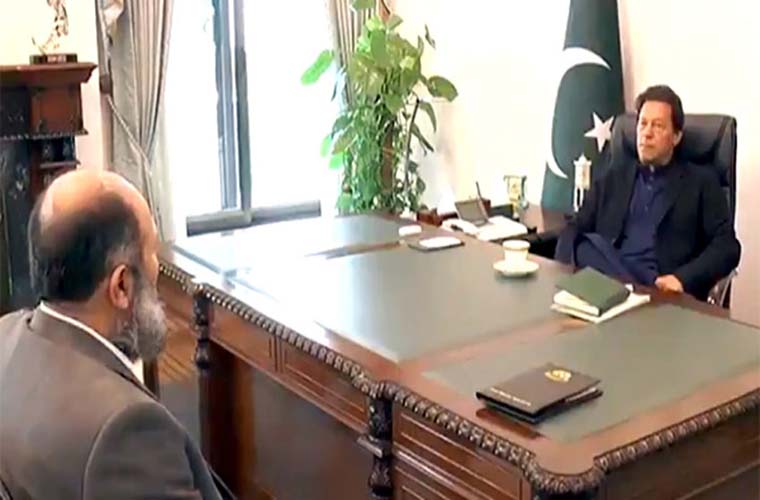 Ongoing development projects and different affairs of the province came under discussion during their meeting.

Timing matters much because Jam Kamal is facing intra-coalition opposition.

For the time being, Senate Chairman Sadiq Sanjrani has rescued him against the opponents.

However, JUIF and BNP also seek to replace him.

Balochistan Assembly Speaker Abdul Qudoos Bizenjo had submitted a privilege motion against Chief Minister Jam Kamal.
He referred to the derogatory words which he said the CM had used against him.
But he reminded Jam Kamal Khan might not know that the Speaker heads the entire House.
He said he had submitted a privilege and now it’s the Privilege Committee to look into the matter.
He said that the committee can summon Balochistan CM at any time.
Bizenjo said that most Balochistan Awami Party (BAP) members remain angry and will come forward at right time.
He claimed that the party MPAs have lost their trust in the chief minister.
He said he would try to bring about a change from the party within and we will make this party an Awami party.

GTV reported last month that JUIF and BNP sought to replace Jam Kamal as Balochistan Chief Minister.
In this connection they had contacted Abdul Quddus Bizenjo.
Balochistan government remains badly affected due to intra-coalition differences.
The coalition began dividing due to CM Jam Kamal who also took back portfolios of two ministers from PTI.
Keeping in view the bickering, BNP and JUIF began efforts to replace present set-up with theirs one.
They have established backdoor channels to form next coalition government in Balochistan.
For that purpose they have contacted Abdul Quddus Bizenjo.
Meanwhile, JUIF Chief Fazalur Rehman had assigned Abdul Ghafoor Hyderi to contact Bizenjo.
Moreover, BAP also remains engaged in such efforts aimed at removing Jam Kamal as CM Balochistan.
GTV