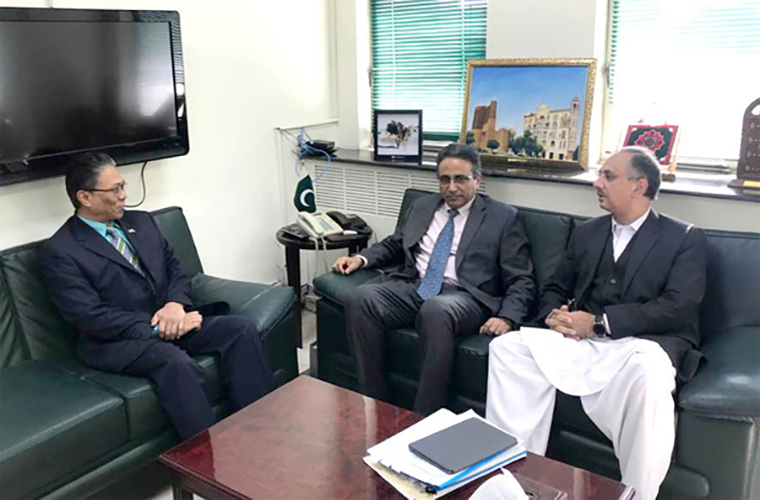 Malaysian HC meets Pakistan Minister for Energy in Islamabad where the latter shared with him the structural reforms which Pakistan is carrying out in the energy sector.
Malaysian High Commissioner Ikram Muhammad Ibrahim also called on Special Assistant to Prime Minister on Petroleum Nadeem Babar.
However, Pakistan Minister and SAPM told him of the government’s special focus on the ease of doing business in the energy sector.
The HC apprised them of preparations Kuala Lumpur was undertaking for the upcoming visit of Prime Minister Imran Khan to Malaysia.

Federal Minister Omar Ayub Khan invited Malaysian investors to fully participate in the auction of oil and gas blocks.
Pakistan offers auction to foreign investors shortly with 18 initial blocks in the first phase.
The SAPM also shared the possibility of Petronas acquiring divested shares from OGDCL, PPL and Mari Petroleum that will be divested to shared partners.
Babar also invited Petronas to favorably look at LNG infrastructure development opportunities in Pakistan.
He also mentioned Malaysian investors can benefit in areas such as LPG, refinery upgradation etc.
The Malaysian envoy commended initiatives taken by the Federal Minister, SAPM and Petroleum Division to facilitate ease of doing business in Pakistan’s Energy sector.
He remarked that Malaysia looked at Pakistan in general and the Pakistani Energy market as of great potential.
He also appreciated the fiscal stabilization agenda of the present Government which is akin to such a process being executed in Malaysia.
The ambassador expressed optimism on Petronas establishing a strong presence in Pakistan in a cross section of Pakistan’s energy industry.
The Malaysian High Commissioner expressed feelings of warmth and a special place that the Prime Minister of Malaysia, Dr. Mahatir Muhammad has towards the state and people of Pakistan.
He shared how the Malaysian Government is looking forward towards the Prime Minister’s visit.
Omar Ayub Khan and Nadeem Babar reciprocated the sentiments of the High Commissioner.
They said that Prime Minister Imran Khan attaches great importance to Malaysia and has deep respect for Dr. Mahatir Muhammad whom he notes an elder statesman who has been his role model in politics.
They agreed that both countries are close and the existing bonds would cement further by PM Khan’s visit and in the years to come.

Pakistan desires peace and stability in the region: Foreign Minister