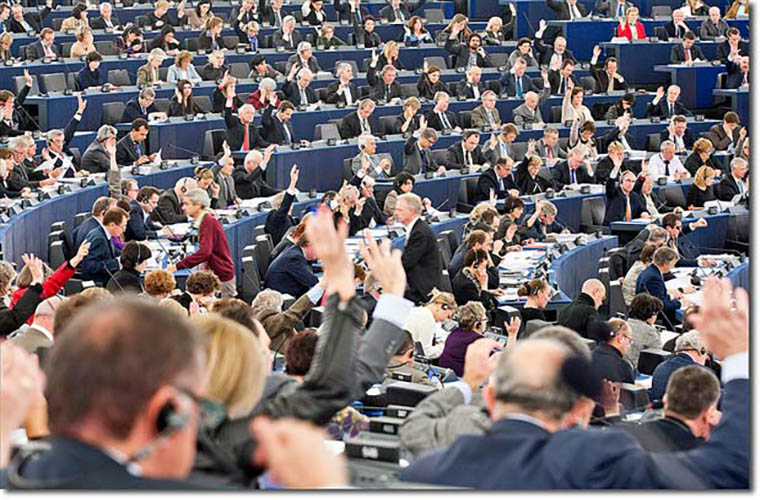 European Parliament vote on Kashmir and Citizenship Amendment Act irks India will take place on Thursday.
It will debate and vote on a scathing resolution against Indian annexation of occupied Kashmir in clear violation of United Nations Security Council resolutions.
According to KMS, the resolution also condemns India’s enforcement of new citizenship laws.
The CAA discriminate against Muslims.
The resolution has called on European Union and its member states to promote implementation of UNSC resolutions on Kashmir.

On the other hand, The Hindu reported that vote on resolutions that urge an end to curbs could have a deep impact on ties between India and the European Union.
However, India has ignored a number of critical international statements and parliamentary resolutions.
Meanwhile, India’s Ministry of External Affairs (MEA) declined an official comment on the resolutions.

But, government sources in New Delhi said they had information that some members of the EU Parliament intend to move a draft resolution on the CAA.
They called CAA is entirely internal matter of India.
Moreover, they noted CAA adoption after due process and democratic means after a public debate in both Houses of Parliament.
Indian government hopes that the sponsors of the draft would engage with New Delhi for an “accurate assessment of the facts before they proceed.”
But the move has irked Modi government.

The draft resolutions (numbering from B9-0077/2020 to B9-0082/2020) are due to be taken up during the plenary session of the European Parliament in Brussels on January 29 for discussion (around 6 p.m. local time) and January 30 for a vote.
The European Commission Vice-President/High Representative of the Union for Foreign Affairs and Security Policy (HR/VP) Josep Borell will first deliver a statement on “India’s Citizenship (Amendment) Act 2019”, the published plenary agenda says.
The EU parliament had discussed developments in Jammu and Kashmir in September 2019, but had not ended in a vote.
In October 2019 the government had even facilitated a visit by 22 EU MEPs to Delhi and Srinagar, but the effort doesn’t appear to have had the desired effect on the European Parliament.
The current resolutions, each of which is worded slightly differently and focuses mainly on the CAA, will be introduced by six different political groups representing a total of 626 of the total 751 members of the European Parliament (MEPs).

China launches another frigate for Pakistan Navy at Shanghai Shipyard