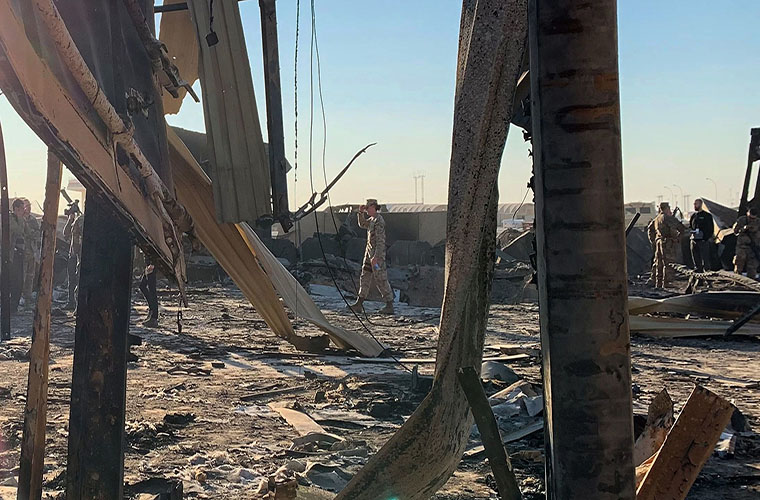 Pentagon confirms 34 troops brain injuries from Iran missile strike. Finally, world sees that US had covered up the harms which Iran retaliatory missile strike inflicted upon US military.
US President Donald Trump had said on January 08 of no harm to Americans.
While speaking to the media at White House, he said: “We suffered no casualties.”
“No Americans were harmed in last night’s attack by the Iranian regime.”
He said so hours after the Iranian attack.

But, finally, US department of defense admitted 34 brain injuries (TBI).
According to Pentagon spokesman Jonathan Hoffman, 8 US troops diagnosed with traumatic brain injury (TBI) arrived in the U.S. on Friday.
He also admitted a total of 34 American servicemembers diagnosed with TBI after Iran missiles hit the al Asad airbase in Iraq on Jan. 8.
The attack came in reprisal for a U.S. drone strike Jan. 3 that targeted top Iranian general Qassed Soleimani.
The npr noted at least the third time U.S. officials have had to revise President Trump’s Jan. 8 claim that no Americans were injured by the Iranian missile barrage.
It further reported that the 8 wounded American soldiers arrived in the U.S. part of a larger contingent of 18 troops diagnosed with TBI.
The US initially medically evacuated them to Landstuhl Regional Medical Center in Germany.
Those now in U.S. will be treated on at out-patient basis either at Walter Reed National Military Medical Center in Bethesda, Md. or at their home bases, according to Hoffman.
The 9 U.S. troops who remain in Landstuhl will continue to undergo evaluation and treatment there.
The US transported one American soldier diagnosed with TBI after the Iranian attack to Kuwait. That soldier has now returned to duty in Iraq.
16 others who stayed in Iraq after being diagnosed with TBI have also returned to duty.
GTV