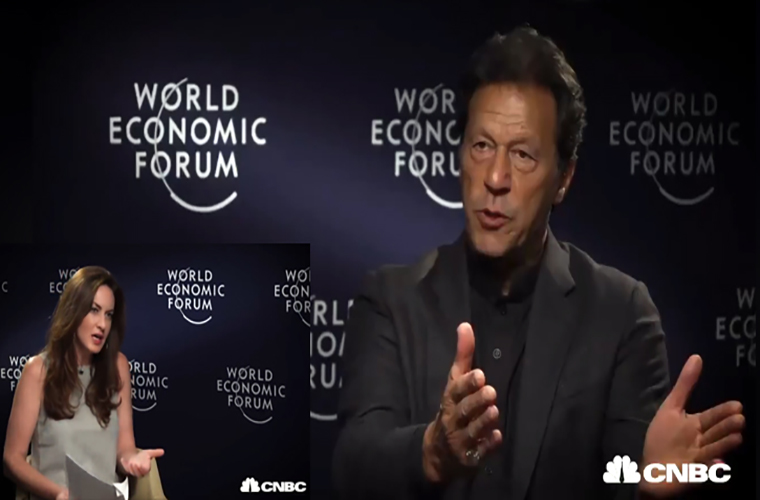 PM alerts world on dangers due to Indian BJP RSS supremacist policy.
At World Economic Forum (WEF) in Davos, Prime Minister Imran Khan raised the issue of oppressed Kashmiris and PM Modi-led India’s atrocities.
In an interview with CNBC, he said Kashmir is a far more serious problem than the people and the world realizes.

He said that extremist ideology Hindutva or the RSS has taken over India.
He once again called upon US President Donald Trump and the United Nations to intervene for resolution of outstanding Kashmir dispute.
He said Modi is a life member of this extremist outfit.
While referring to the situation in occupied Kashmir, he said eight million people have been put under siege there since 5th August last year.
The Indian forces have picked up thousands of Kashmiri teenagers and arrested all their political leaders.
He said it is a serious situation and warned that this could potentially spill over in to a conflict between the two nuclear armed countries.

When asked US- Iran tension, the Prime Minister said war is not a solution to any problem.
He warned that a conflict with Iran will be disastrous for the developing countries as it will shoot up the oil prices. He said the sensible way forward is dialogue.
The Prime Minister made it clear that Pakistan will only be partner in peace. He reminded that Pakistan suffered heavily both in terms of human and material losses in the war on terrorism.
Imran Khan said Pakistan is now a safe country and ready for business. Hailing the sacrifices rendered by security forces in the war on terrorism, he said Pakistan has disarmed the militias and rehabilitated them.

Responding to a question, the Prime Minister rejected the impression that the CPEC has made Pakistan indebted to China.
He pointed out that the Chinese loans only account for five or six per cent of Pakistan’s total loan portfolio.
He said China helped Pakistan in the most difficult times by making investments and we are grateful to them.
He said the CPEC also envisages cooperation in different sectors including technology transfer in the agriculture sector.
About Pakistan’s economy, the Prime Minister said the country is now on the right track and our focus is on export led growth by promoting industrialization.