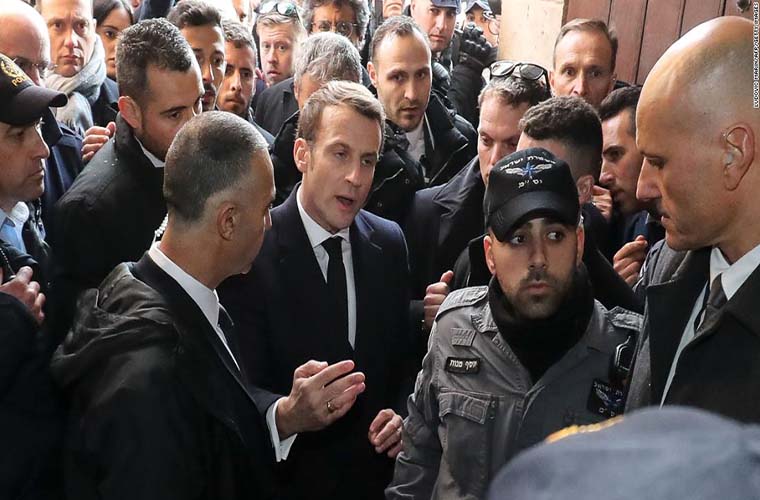 French President admonishes Israeli security officer in occupied Jerusalem church due to violation of rules.
However, CNN reported an altercation of French President Emmanuel Macron with Israeli security officers.
Macron was visiting Occupied Jerusalem to attend a large Holocaust remembrance event on Thursday.
During that visit, he also went to the Church of Saint Anne.
In 1856, the Ottoman Sultan gifted to Napoleon III, this Roman Catholic church, which dates back to the 12th century.
For that reason, France says it belongs to the French government and French territory.

Macron admonished the security officers for apparently trying to follow him into the church.
He reminded Israeli offider that everybody knows the rules.
He said he doesan’t like what ISA officder did in front of him.
President Macron urged him to go outside and even shouted at him because of his stubbornness.
He said: Please respect the rules. He remined rules in place for centuries.

French President reminded Israeli security officer rules would not change with him and he can tell him that.
A spokeswoman for the Elysée Palace told CNN that the President had intervened after an exchange between French and Israeli security.
She said St. Anne belongs to France in Jerusalem and it is up to France to protect these places in this city.
She noted Israeli security forces wanted to enter while French security services was providing the security.
The president reacted to an altercation between the Israeli and French security forces at the time of entering Saint Anne in order to end it.
She said he reminded everyone of the rules that apply.
Israeli officials described the incident between Israeli and French security officers as a “discussion” and said the visit had passed off according to plan.
“Based on the terms agreed upon ahead of time, an Israel Security Agency (ISA) guard and a policeman escorted the French president and his delegation inside,” a joint police and ISA statement read.
President Macron had apologized about the incident once the delegation had concluded its visit to the church, the statement added.
A spokeswoman traveling with Macron declined to confirm if the President did apologize, saying, “I don’t know. I didn’t witness that moment.”
France does not recognize Israeli sovereignty over the Old City, as it lies in the eastern part of Jerusalem, which it regards as occupied territory.
GTV

US to send warship, fighter jets to UAE after Houthi Attacks

US President Trump bans travel from Europe due to Coronavirus fear