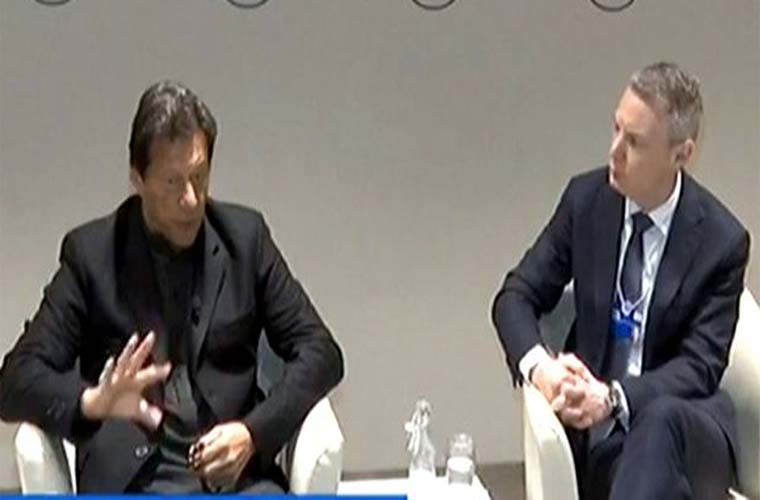 Prime Minister tells world of Pakistan partnership in peace.
He reiterated it, while addressing a session on Pakistan Country Strategy Dialogue at World Economic Congress Center in Davos today (Wednesday).
Prime Minister Imran Khan has once again categorically stated that Pakistan will not become part of any conflict in future.
Instead, he emphasized Pakistan’s role as a partner in peace.
PM Khan said Pakistan has played its part in trying to avert the conflict between Saudi Arabia and Iran.

He recalled that both the Afghan jihad and the war against terrorism after 9/11 cost Pakistan heavily and inflicted a lot of damage to society.
He pointed out that the war on terrorism left 70 thousand Pakistanis dead but Pakistan dismantled the terrorist groups.
The PM said we are also actively participating to facilitate the Afghan peace process.
He said there is a chance of ceasefire in Afghanistan which will help us reach the Central Asian countries through the economic corridor.

While alluding to the economic situation of Pakistan, he said his first year remained focused on stabilization measures which helped us significantly cut the current account deficit.
This year, he said, we want to grow our economy in order to provide jobs to our youth.  He said we are doing everything possible to attract investment and incentivize the industries.
He also referred to the steps the government had taken to remove hurdles in the way of investment.
Prime Minister also cited that the World Bank has improved our ranking for ease of doing business while foreign investment in one year jumped two hundred percent.
He said Pakistan remains hopeful to attract investments in different sectors including agriculture, minerals and information technology.
Prime Minister highlighted the tourism potential of Pakistan including its centuries old civilization.
He said our country is one of the most undiscovered countries in the world. He said we can strengthen our economy by tapping the true potential of tourism.
Imran said several world institutions have declared Pakistan as one of the most exciting tourism destinations.
PM Khan said the tourism doubled in one year as a result of steps which the government had taken.
Read More on Prime Minister Davos Visit
CEOs of YouTube and Siemens meet Prime Minster at WEF 2020

IHC directs authorities to contact the family of Arshad Sharif