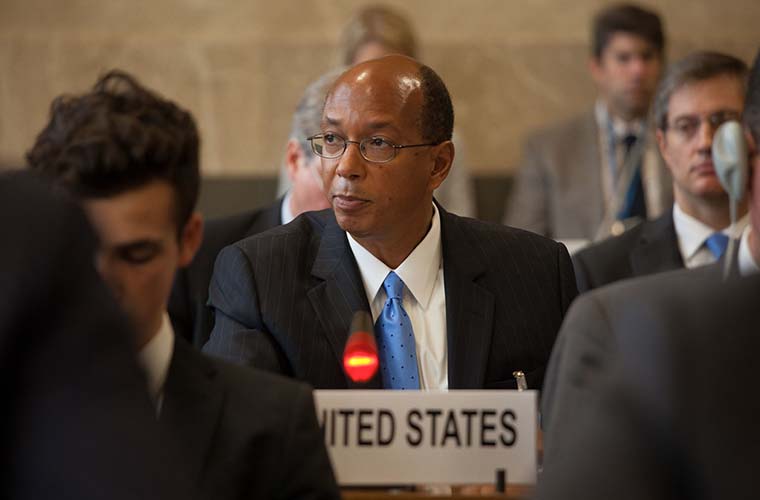 Ambassador Robert A Wood has reacted angrily to the bounty offer. He called it ludicrous.

Wood had joined his duties as the U.S. Permanent Representative to the Conference on Disarmament and U.S. Special Representative for Biological and Toxin Weapons Convention (BWC) Issues in Geneva on August 13, 2014.

An Iranian lawmaker on Tuesday offered a $3-million reward to anyone who kills US President Donald Trump to avenge the assassination of general Soleimani.

The AFP reported it quoting semi-official news agency ISNA.
Ahmad Hamzeh, a little-known member of the Majlis from Kahnuj (Kerman), made the offer on behalf of the people of Kerman.
US military had assassinated Iranian Lt Gen Qassem Soleimani in illegal airstrikes in Baghdad.
Soleimani was one of the most popular public figures in Iran.
US-Iran heightened tension further aggravated due to US illegal airstrikes in Baghdad on January 3.
In retaliation, Iranian missiles reduced US military installations at Ain al Assad base in Iraq to ground.
However, the Supreme Leader of Iran Ayatollah Seyyed Ali Khamenei called it a slap.
He termed the IRGC missiles attack a major blow to the US because it broke its image as a superpower.
Meanwhile, CNN also predicted humiliation US military pullout due to Iraq related developments.
It also predicted embarrassing end to US operation in Iraq while Iran power will grow.
According to its report, the US is facing the possibility of being kicked out.
The CNN term that would be a big win for Iran.