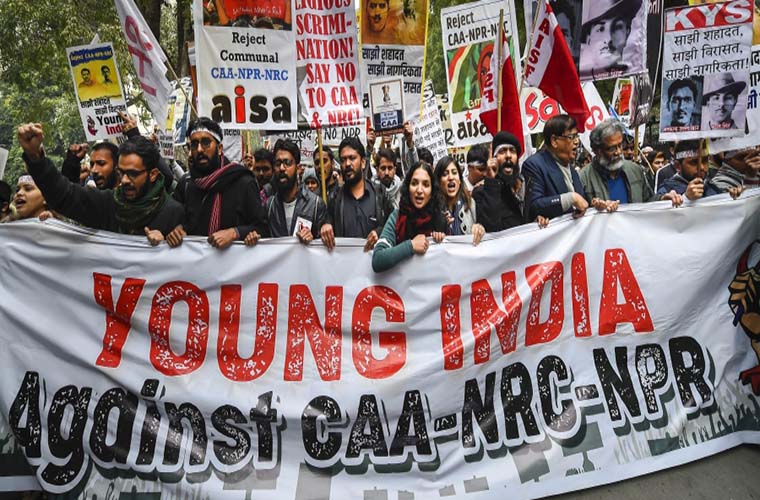 The protestors registered protest under the banner of Young India against CAA-NRC-NPR.
Furthermore, they appealed the supreme court to abolish the law.
They emphasised that the government must focus on issues such as poverty, education, slowing economy and unemployment.
They called for focus on said issues rather than bringing in some law that divides the country.
Meanwhile, critics have also questioned Muslim exclusion calling it discriminatory law and a deliberate attempt to target them with a larger political agenda.

In occupied Kashmir, Indian troops in their fresh act of state terrorism martyred three youth in Shopian district Monday.
The troops used heavy weapons and chemical gunpowder and destroyed a house during a cordon and search operation in Wachi Letter area of the district.
The Indian forces have blocked all entry and exit points and have started house-to-house searches in the area.

Meanwhile, Congress Party of India vowed to pass resolutions against the controversial Citizenship Amendment Act.
The Congress leader Ahmed Patel said they would pass resolutions against CAA in state assemblies of Rajasthan, Madhya Pardesh and Chhattisgarh.
There, they enjoy enough strength to reject the bill legally.
However, he further said that the Congress want to send a clear message to the central government to reconsider the Act.
GTV