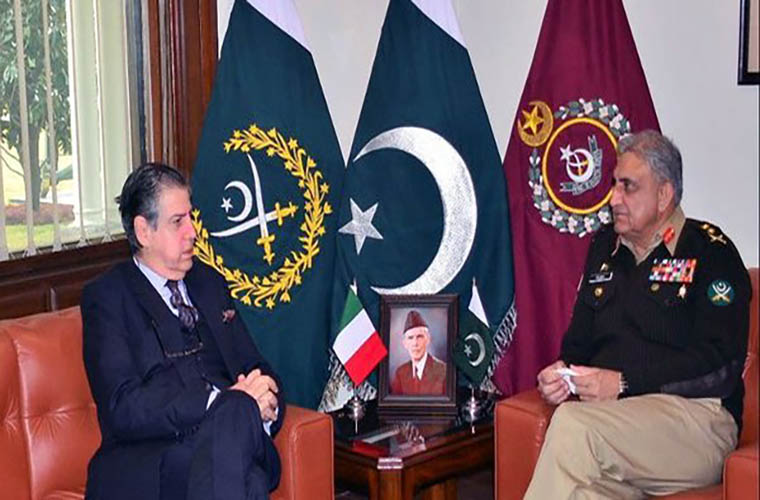 He appreciated Pakistan’s role for ensuring peace and stability in the region.

The COAS thanked the Ambassador for his services in Pakistan.

He acknowledged his contributions towards strengthening Pakistan -Italy relations.

The COAS also congratulated the ambassador on his appointment as Civil Senior Representative of North Atlantic Treaty Organization (NATO) in Afghanistan.

Sardar Masood Khan met him at GHQ in Rawalpindi today on Tuesday.

During the meeting, they discussed matters of mutual interest.

Particularly, they discussed situation on Line of Control and Indian occupied Jammu and Kashmir.

Azad Jammu and Kashmir president discussed the prevailing situation on the Line of Control (LOC).

While talking to him, Army Chief General reiterated Pakistan Army’s full support and commitment to the Kashmir cause and its people.

According to the Inter Services Public Relations (ISPR), he was chief guest of inaugural ceremony.

The COAS praised it as a good endeavor for reviving the national game.

Pakistan government and nation continue to raise the issue of oppressed Kashmiris of India-occupied Kashmir.

Since August 5, 2019, Indian government has intensified siege of IOJK while stripping its special status.

However, international community has failed to settle the Kashmir dispute.